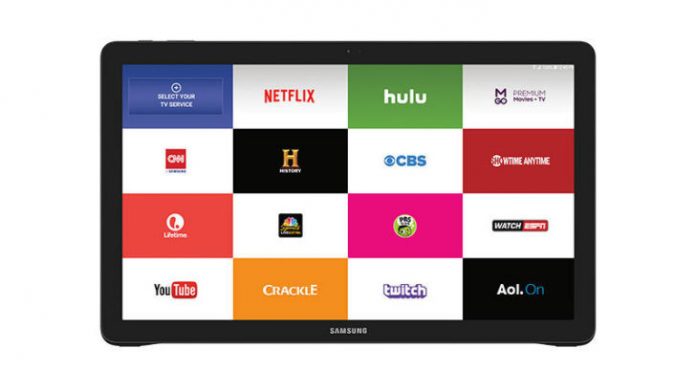 Samsung has already unveiled two tablets, a Galaxy Tab S4 and a new Galaxy Tab A. It’s now prepping a giant tablet, the so called Samsung Galaxy View 2, according to a source. It’ll be a 17 incher with Android on board and it’s supposed to come to AT&T.

Samsung Galaxy View packed an 18.4 inch display and ran Android 5.1 so it’s THAT old. It was also priced rather high for a video consumption machine, at $600. However, if you consider that you could use it as a huge portable monitor, with a full OS, things weren’t that bad. It was a huge machine, at 6 pounds and pretty hard to carry around. At least it had a handle…

Now the Galaxy View 2 is said to be more compact, not only the 17 inch screen, but also the weight. The source mentions a switch to USB Type-C and in lieu of a handle, it’ll use a book-style hinge as a stand. It can be set up in two basic configs: a closed position, with the hinge letting the Galaxy View 2 be used like a drafting desk and the the open position letting you use the hinge as a stand that keeps the screen upright.

This basically makes it like some sort of laptop. The hinge and stand are fixed, not removable. Galaxy View 2 has an Exynos CPU, a Full HD resolution and it’ll probably weigh around 5 pounds, maybe less. 3 GB of RAM are on board, there’s no love for a stylus and no DeX Mode. Multi Window functionality is here and the OS is Android Oreo. Expect AT&T to push its own services for video watching.

Chuwi Mini Pad V88 is a Chinese Alternative to the iPad...