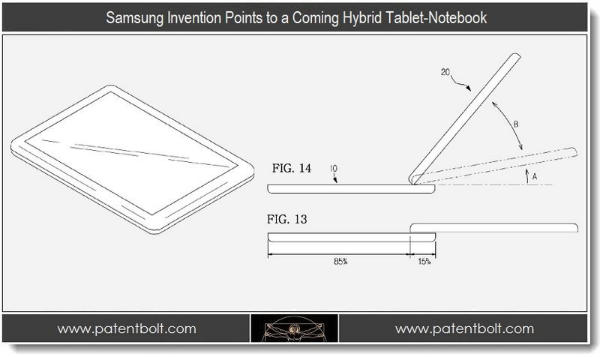 We’ve seen all sorts of weird hybrids this year at Computex, starting from sliding tablets to All in one PCs slash tablets and a lot of convertible notebooks with detachable tablets as screens. Most of the original formats were ASUS gear, but now Samsung also wants to create something original, or so it appears from their latest patent.

The document shows the sketch above and reveals something that looks like a tablet and notebook hybrid. This unit would hit the stores in the close future, especially since the patent was filed back in December 2011 with the US Patent and Trademark Office. It mentions a mechanism that combines a touchscreen display with a full size keyboard and allows the user to switch between tablet mode and notebook mode. This means that you get a hinge binding together the two components and allowing a seamless transition between the two modes.

It’s interesting that there’s no mention of Android here, so Samsung could either go with Windows 8 or surprise us with a dual boot device, that gets both the latest Android and Windows 8. Or maybe they’ll go with a Windows 8 + Chrome OS combo. Is Samsung ready to develop a successful hybrid?