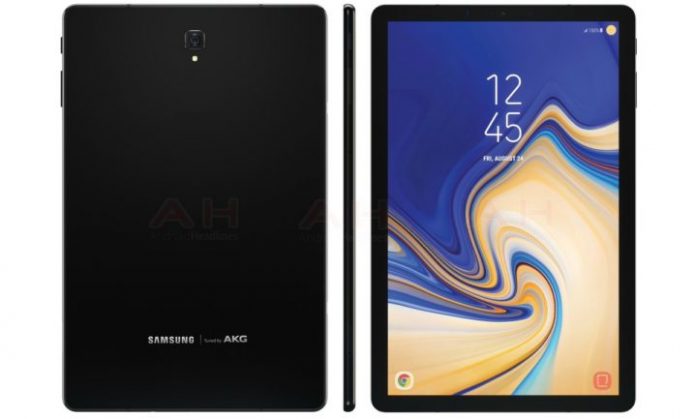 Samsung Galaxy Tab S4 is leaking every day now, apparently. After learning a thing or two about its specs and the way it plays with a DeX Pad, now it seems that we are finally treated to a render. The image came via AndroidHeadlines, as an exclusive.

There are a few interesting aspects to gather from this leak. First the main camera has a flash, which you don’t see every day on a slate. It also has rounded corners and narrower bezels compared to the latest Samsung slates. There’s also the AKG tuning mentioned at the back via that logo.

The back side is rather similar to the Galaxy Tab S3 to be honest, since both of them have a pretty similar design approach. The power and volume buttons on the side stay just where we left them compared to the predecessor. The facade is supposed to include a 10.5 inch panel, meaning it’s bigger than the Galaxy Tab S3 9.7 incher.

There’s also a potential new screen to body ratio, a more generous one and maybe also a new aspect ratio. An iris scanner is presumably here, if you look closely. The oddest thing is probably the lack of a Home button on the chin. We can’t help but wonder where the fingerprint scanner has been put.

Samsung could use a fingerprint scanner embedded in the screen, but we’re not sure the technology is ready for prime time just yet. Samsung Galaxy Tab S4 is expected to pack 4 GB of RAM, 64 GB of storage, a Snapdragon 835 CPU and a 7300 mAh battery. Android 8.1 Oreo is also here, plus a 13 MP back shooter and 8 MP front cam. Launch time? Either August 9th with Note 9 or IFA 2018.