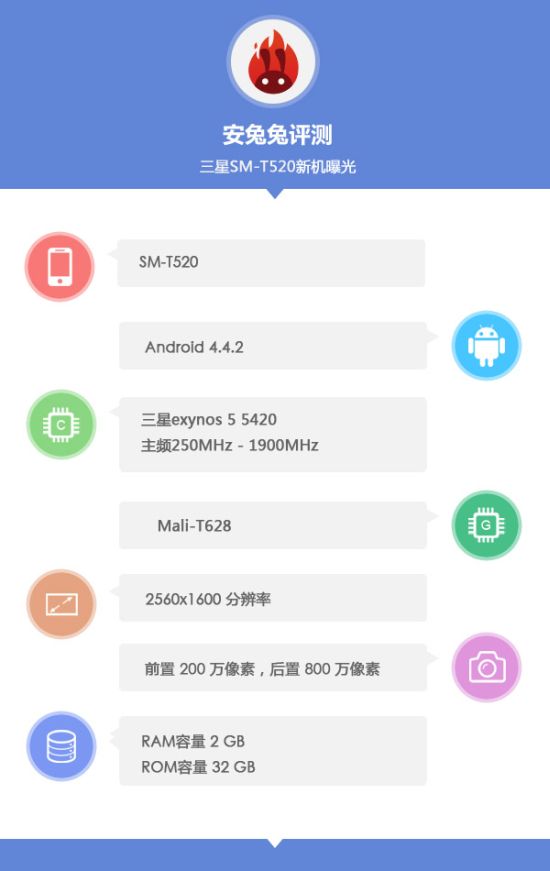 Courtesy of a fresh benchmark leak, we get some more intel on one of the upcoming Samsung tablets. It’s the Galaxy Tab Pro 10.1, as some call it, or the SM-T520 as the leak dubs it. This model is a 10.1 incher that recently appeared in AnTuTu’s results.

The idea of a Pro model within the Galaxy Tab series isn’t new and it’s been thrown around in the middle of 2013, as the Galaxy Tab 3 Pro model was rumored. Now the SM-T520 seems to fit that area, with a 10.1 inch 2560 x 1600 pixel display,2  GB of RAM and Samsung’s Exynos 5420 processor at the core. This is supposed to become a true octa core unit with the aid of a software update.

Other specs leaked from AnTuTu include 32 GB of storage, an 8 megapixel main camera and a 2 megapixel front shooter. Android 4.4.2 is the OS here and judging by the FCC filing from a couple of weeks ago, this device will measure 172 mm in length and 243 mm in width, so it can incorporate a 10.1 inch screen easily.

Will this be the AMOLED unit we’ve been hearing about?