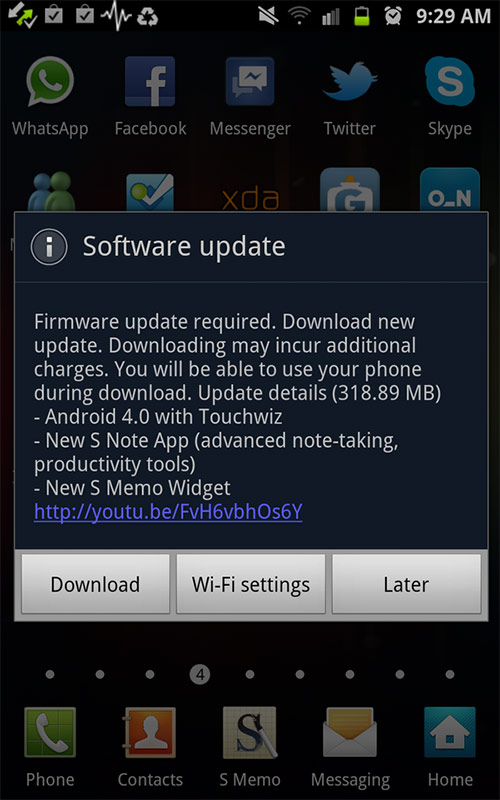 The news of the day is that Samsung Galaxy Note has finally received the long awaited Android 4.0 ICS update, that’s available right now. Galaxy Note N7000 should have received the update much earlier, since it must’ve already surpassed the 6-7 million mark of units sold, so it’s a very popular and important device.

A few users have been receiving notifications that the firmware upgrade with Android 4.0 included is here. The Premium Suite apps are also in the mix, in case you’re wondering. Such firmware updates are usually released regionally, so you’ll have to wait a bit for the release. The XDA Developers community found out that this is the XXLPY Android 4.0.3 build with a build date of May 4. Right now in Germany people are receiving the update via Kies and if you have extra details in other countries, feel free to post them in the Comments area.

What’s the Premium Suite, you ask? An enhancement of multimedia features and new S Pen optimized applications. There’s a new S Note app, that allows you to create your own notebook on the device with 7 templates available: Note, Meeting Note, Idea Note, Magazine, Travel, Diary and Recipe. There’s also the Automatic Shape Correction feature in this mix, helping you straighten up lines and create rectangular shapes easily, so if you want to make charts on your phablet everything works out fine.

The Premium suite allows you to save PDF files and gives you the new My Store app, that allows you to create multimedia letters and cards. Excited for this release?