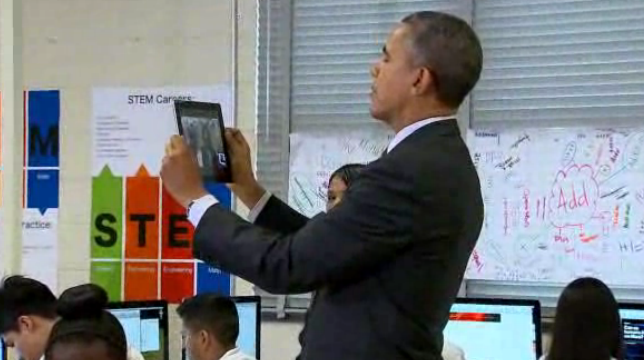 President Barack Obama once again proved to be tech savvy by shooting his visit to a school using an iPad. The US official visited a Maryland middle school and talked to students about their computer work.

He used one of the student’s iPad and started recording a video of the class and the video can be watched below. There was also a funny happening, with a false start when the iPad wasn’t recording. Obama panned around the classroom and even cracked a joke, saying that “as you get older as president, everybody looks much younger than you”.

Mike, the Secret Service Agent was also in the video, as well as the press corps. The US President was there to announce a public-private plan to help schools and libraries get high speed Internet connections. The FCC will announce a down payment of $2 billion to connect over 15,000 schools and 20 million students to high speed broadband.