Having a Nook Tablet for testing purposes, I can only say I’m happy to see how this product can evolve software-wise and even get a slice of Android 4.0 on it. Of course, that happens unofficially courtesy of CyanogenMod 9 and it sure took a while for this to happen, actually more than the Kindle Fire. 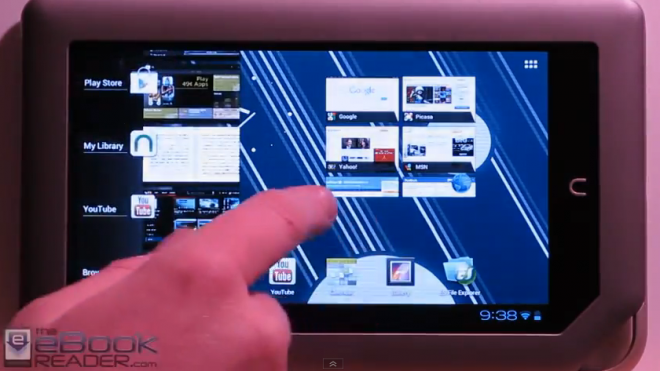 The Barnes & Noble slate gets the alpha build, that seems to run decently well, as shown in the video below. A few things still don’t work, stuff like hardware accelerated graphics, microphone, Bluetooth and hardware composition. Many other bugs and quirks make daily use not quite satisfying. In the video below we still get the basic features, like WiFi, accelerometer, even Android Market, the display is flawless and even the sound works. I advise the average user to stay away for now and I will too, at least till there’s a more stable build.

Web browsing looks nice, there’s multitasking through that list of apps that can be swiped to be stopped. There’s also a screenshot feature demoed, as well as a new game with a skater boy that I’ve actually shown you in a recent review, as well. The list of apps and widgets seems to work fine, the placing of widgets on the screen is possible and live wallpapers work fine. So… did you install it yet?