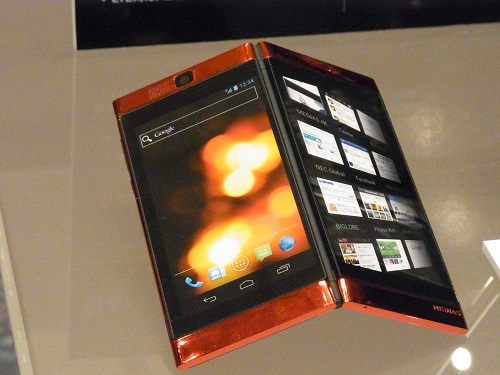 There’s been an interesting device floating on the interwebs over the past hours, a NEC dual screen device, that’s seen by some as a phone and by others as a tablet. The format is similar to the one of the Sony Tablet P, but inside out, with the exterior side offering the displays.

This Android device will be shown in Barcelona at MWC 2012. Apparently, the product is in concept phase, so the specs are not known just yet. With the double display, I suppose that one of the screens can be used as the virtual keyboards with no problem. NEC could actually promote this is a smartablet, since it can be used as a phone and when the displays are next to each other they make one bigger screen (separated by hinge), much like a smaller tablet.

NEC describes this as the Best Cloud Device and we know that it comes with Android 4.0 Ice Cream Sandwich, 4G LTE connectivity and most likely a dual core CPU, but quad core is also in the books. I can see a front camera on top of one of the displays, or maybe it’s the main camera, since this device is inside out. Anyway, we’ll get more of this beauty once MWC stars.