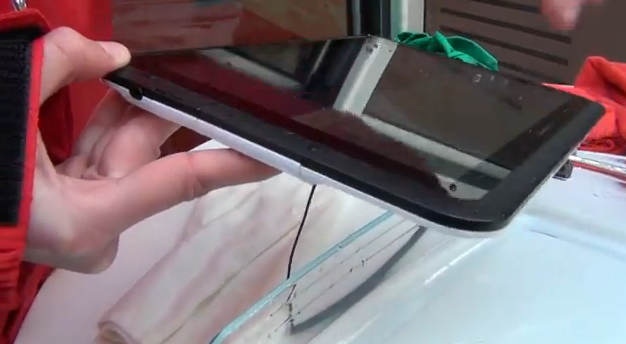 Back at CES 2012 last month there was this Fujitsu tablet submerged in water and now in Barcelona we’ve spotted it again. Branded with the Japanese carrier NTT DoCoMo’s logo, the device was only submerged for a bit then shown to us, so we couldn’t type on it or anything, like users of the Xperia Active phone do with the wet finger tracking system. The Fujitsu Arrows waterproof tablet will have to be dry to be typed on.

The device weighs 599 grams, measures 11.3mm in thickness and has a battery that provides around 10 hours of functioning time, at least for video playback. There’s also a 5MP camera at the back and a 1.3MP shooter at the front and as far as internal memory goes, you get either 16GB or 32GB of storage. We don’t have an exact launch date for USA for this model, but at least we know that it’s coming with LTE. The device runs Honeycomb 3.2 right now, but it may get the update to Android 4.0.

Fujitsu Arrows is a tablet with a 10.1 inch 1280 x 800 pixel display, a dual core OMAP4 1GHz processor and Dolby Mobile 3 technology with virtual 5.1 surround sound. I can imagine that such waterproof devices will be big on construction sites, aquariums and… beaches, but other than that I see no real use for this function.