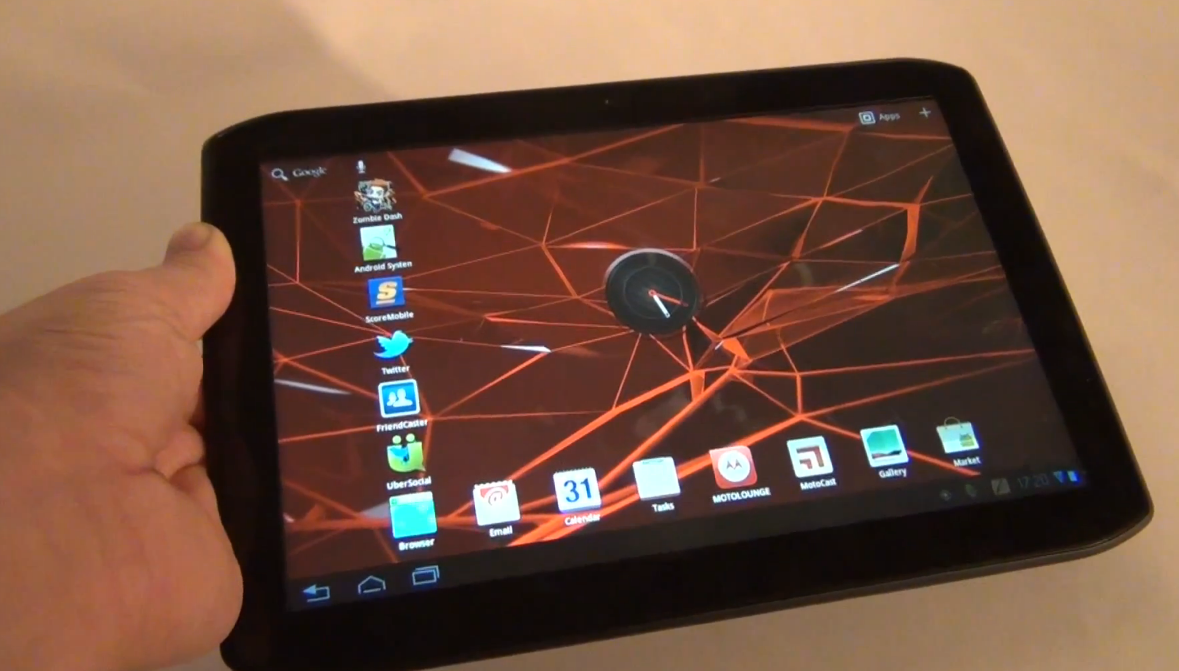 Motorola Droid Xyboard 10.1, also known as the Xoom 2 in Europe has reached us for testing purposes. This is 10.1 inch version of the Xyboard duo, that also includes a 8.2 incher unit. Our unit was the 32GB 3G one, that you’ll find priced at $629.99 at Verizon Wireless and other similar retailers and carriers. The price is quite impressive, so before spending so much, you have to get a decent analysis of what’s going on with this product. That’s what we’re here for. 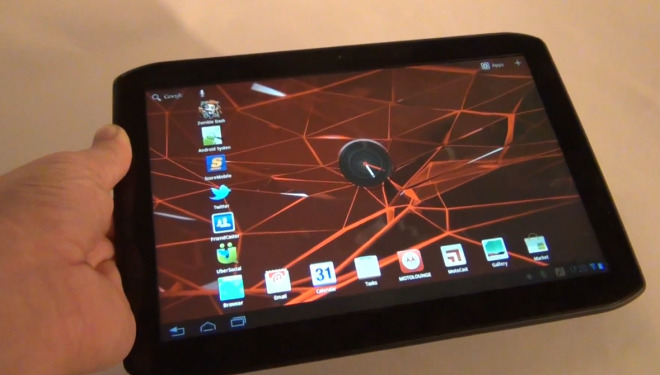 The Xoom 2 features a dual core TI OMAP 1.2GHz dual core processor and it uses a 10.1 inch 1280 x 800 pixel IPS LCD screen with Gorilla Glass protection. The tablet measures 8.8mm in thickness, so it’s quite thin, but also pretty heavy, at 599 grams, or maybe I’m too picky when it comes to slate weight. In the USA this device comes with 4G LTE connectivity, which is always an extra if you compare tablets to the iPad, that still doesn’t have this type of connectivity.

Back to the Xoom 2, the new unit has stereo speakers, a microSD card slot, 1 GB of RAM, WiFi, Bluetooth 2.1 and a 5 megapixel camera at the back with autofocus, LED flash and support for 1080p video capture. We also get a secondary front camera with a 1.3MP resolution and the specs list is rounded up by an accelerometer, gyroscope, compass, barometer, A-GPS, HDMI port and DLNA. The battery here is a 7000 mAh one, that gives you about 9-10 hours of use. The design of the tablet reminds me of the Nokia X7 handset, because of those rounded corners and I consider the choice of wrapping the tablet edges into something that looks like rubber to be pretty poor. First of all the On/Off button and volume keys aren’t at all easy to press, since they’re too embedded into the device. 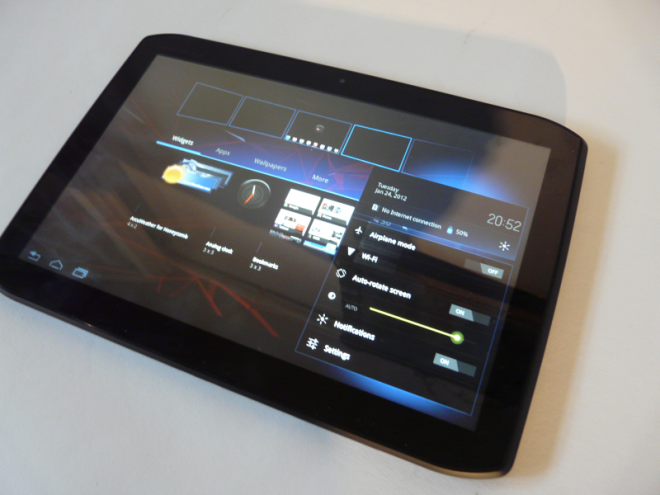 Second, the speakers on the back of the Xoom 2 make the tablet vibrate a bit and that’s inexcusable for such an expensive product. At least the display has decent viewing angles, it’s bright and Honeycomb behaves just fine on the slate. Gone are the problems of the Sony Tablet S, for example, that was very poor when handling the Android OS for tablets. Motorola also promised to deliver Android 4.0 Ice Cream Sandwich ASAP to this model, so I’m expecting this update soon, considering the first Xoom was already updated.

Another feat I must mention is the anti splash coating on the device’s circuits and internal components, that will protect it from rain, in case you feel like taking pics on a rainy or snowy day. As far as software customization goes, it’s all in the icons and widgets, with minor design changes for those, so not much of a difference from other Honeycomb models. The interesting part here is that you get a Notes area at the bottom-right of the screen, with three options including Evernote allowing you to take notes, draw and attach pictures on the go.

I almost forgot to tell you that there’s also an infrared emitter at the top of the tablet, one that in combo with the Dijit app will allow you to control compatible devices, such as television sets and whatnot. If you wonder about multimedia playback, know that video and audio playback work fine, with the exception of the songs with too much bass, that will make the back of the tablet vibrate. On the video/photo capture side, the camera is actually decent, especially when filming in 1080p, but I can’t really say I felt the upgrade from the first Xoom. 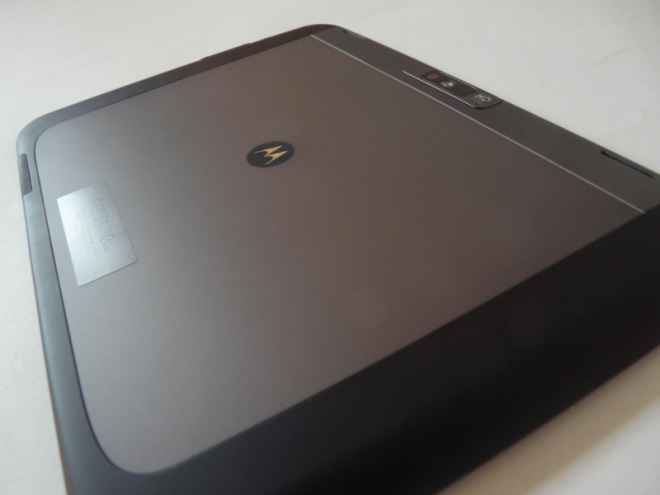 Still in the multimedia section, I’ve shown you towards the end of the review the Skifta app that you can use to stream stuff to and from the tablet via wireless. You simply turn this free Android app on, both on the Xoom 2 and the other device (could be a smartphone, tablet, could be a PC and it even works with an Xbox) and you’re all set. Also you must know that both the microSD card slot and the microSIM are placed at the bottom of the tablet and they’re covered with a plastic piece. The 3G connectivity works fine and there’s no problem with reception.

I really feel that Android 4.0 would add to this product, but considering the first Xoom already has it, I see no point on regarding that as a selling point. I feel that the Xyboard 10.1 aka Xoom 2 is a big disappointing, since it offers everything that the first Xoom offered, with a minor enhancement of the processor, some extra functions and apps and a decent camera. Honestly, that’s not enough to turn one away from the Samsung Galaxy Tab 10.1 or one of the appealing ASUS Transformer tablets. 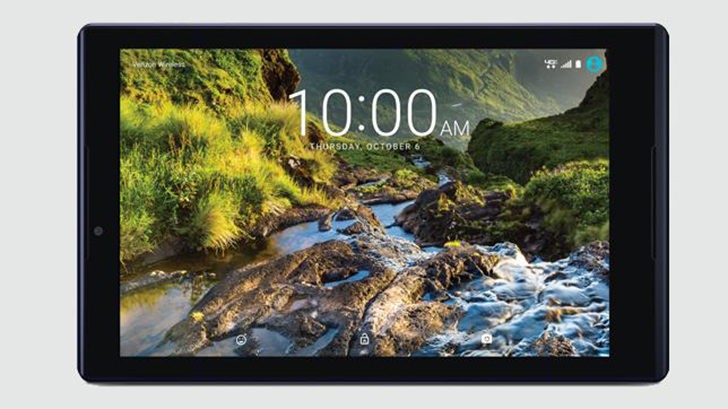