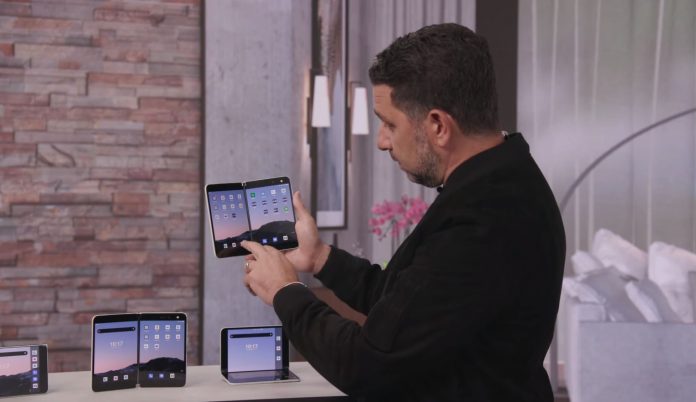 So, let me take you through the whole evolution of the Microsoft Surface Duo. It was announced back in October, actually October 1st 2019 and it had a holiday 2020 release time frame. Over the past few months we learned that the dual screen Android phone was ready for prime time and would debut this summer. A couple of days ago, the device got a preorder price of $1399 and a delivery date of September 10th. And now we get a 35 minute press briefing below, on video, detailing the device.

This demo video features Chief Product Office Panos Panay, who shows Microsoft’s vision for improved mobile productivity. The target audience is described as “Surface fans” and people who use Office, Teams and Outlook on a regular basis. Android users are also welcome. Turns out that Microsoft didn’t set out to reinvent the phone, instead they wanted to make it better, an improved way of connecting with people and doing productivity-related actions.

In the demo we see the Surface Duo finalized model in action. We also get to see the multiple screen modes and supported apps. The Amazon Kindle app also makes an appearance, showing pages on both sides. Microsoft wants to mimic a real life book experience and dubbed the “one app on two pages” approach as “spanning”. Turns out that the human brain reacts differently when seeing two screens side by side connected. “It lights up, it magnifies”, according to the Microsoft man.

If you want to know more about design, there’s a section at the end referring to “ultra thin wires between screens”. They carry date, power and control signals. We also get two batteries and in the the middle of the demo, we get to see the multiple use modes, including tent, “laptop”, phone and more. Panos seems really excited about the product…

I’ve always had mixed feelings about this product, going as far as to call it Dead on Arrival in the last piece of news I wrote about it. The software part of it looks OK in the demo, but doesn’t justify the price one bit.

ASUS Nakasi Could be the Codename of the Nexus 7 Tablet