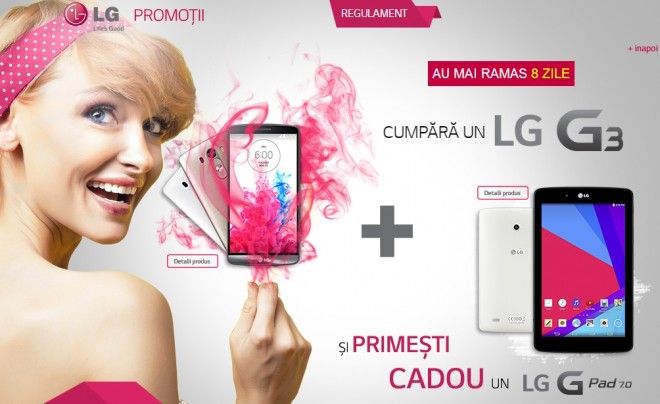 In an attempt to fight back at Samsung’s hot offers that lately have been related to TV sets and tablets, LG is now bundling a tablet with the purchase of the LG G3. Yes, you’ve read it right, not only are you getting the G3 for a mere $600, but also a LG G Pad 7.0 tablet. That happens in Romania, according to sister site Mobilissimo.ro.

The offer was initially available for the first week of July, but it has been expanded till September, so that’s cool. It’s also important to mention that the rules of the promotion are changing every day now, so they may switch again. The LG G3 must be purchased from an official LG partner (retailer) in order for the promo to apply. Just a quick reminder of what you’re getting on the tablet: a 7 inch screen with a 1280 x 800 pixel resolution, a 1.2 GHz Snapdragon 400 quad core CPU, 1 GB of RAM and 8 GB of storage.

There’s a 5 MP back camera, microSD card slot and a 4000 mAh battery. The slate comes with LG’s proprietary Knock Code and QPair 2.0, that lets you pair the tablet to the smartphone to answer phone calls. The 7 inch G Pad comes in six colors and it’s a very appealing product on its own, let alone bundled with a handset that’s already seen as the “phone of the year 2014” by many.