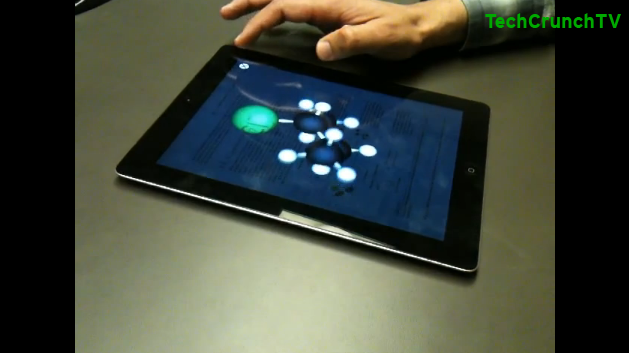 Remember the Kno, a tablet textbook that was supposed to take over universities and schools? Well, now the person who started the Kno company, Osman Rashid shows us a very cool feature, that seems to bring textbooks to life. We’ve got Facebook integration, activity streams and a 3D modeling feature.

This 3D feature works great with chemistry textbooks as shown in the video below. It displays chemistry models, detailing the atom’s bonds and molecules, all in a spinning 3D model. You can interact with the model, enlarge and rotate it, to give the students a better understanding of the idea.

While some people still argue that students need pen and paper for a better learning process, this single example of 3D graphics is good enough to convince me to adopt Kno and its 3D features. There’s a Kno iPad app out there, that has recently received an update, most likely including the 3D feature as well. Other new stuff added is the video note system, audio notes, photos, highlight stream and the ability to add videos recorded with the iPad’s camera.