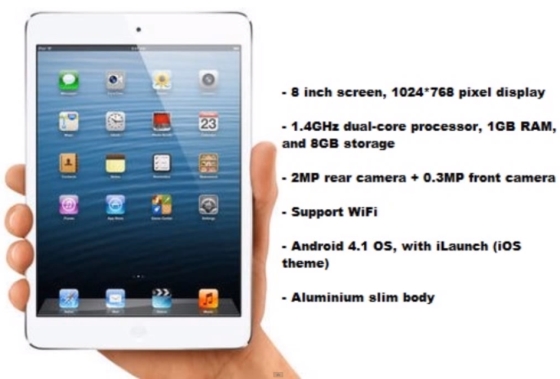 Well, it hasn’t taken a long while till the iPad Mini was cloned, that’s for sure. And with all the leaks of the 7.9 inch iPad out there, I’m sure the clone was in the making for a while now. You should know that the iPad Minis a 7.9 inch dual core tablet priced at $329, while its clone is an Android device priced at $99 and running Android.

GooPhone GooPad is the name and this is a $99 iPad Mini copycat, supposed to launch in November. It packs an 8 inch screen, a 1.4 GHz dual core CPU and the Apple-inspired design. The device supports a 1024 x 768 pixel resolution and packs a 2 megapixel rear camera, plus a 0.3 megapixel front shooter. There’s also 1GB of RAM on board, 8 GB of storage and Android 4.1 as the OS. What funny is that we haven’t even seen the GooPad yet, since the company behind it is using the iPad Mini official shot to promote its gizmo.

Well, at least it runs Android 4.1, unlike some modern budget tablets out there. However, considering the rumors about a $99 Nexus 7, you might as well wait for the real deal… At least it won’t break after a week of use.