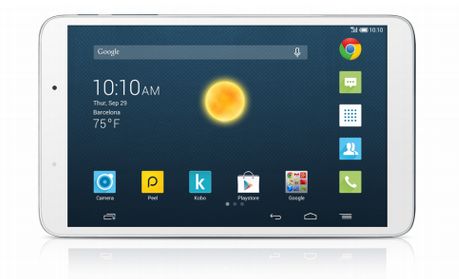 Alcatel couldn’t miss IFA 2014, after a pretty good showing at this year’s MWC. They introduced a new tablet in Berlin, the OneTouch Hero 8 model, that’s shown below. This device is an aluminum slate with an 8 inch display and a Full HD resolution.

The resolution is actually 1920 x 1200 pixels and inside this unit we’ve got a MediaTek MT8392 octa core processor. The tablet will be available for purchase this month, packing among the specs 2 GB of RAM, 16 GB of storage and a 5 megapixel back camera, as well as a 2 MP front shooter. Alcatel OneTouch Hero 8 has a 4060 mAh battery, WiFi 802.11n, Bluetooth 4.0 and 4G LTE. It will also support phone calls on certain markets.

This model comes with Miracast, an infrared sensor, that allows you to use the slate as a TV remote and a microSD card slot for removable storage, as well as optional NFC. The product measures 0.29 inches in thickness and weighs 11 ounces. It comes with a variety of accessories, including a Bluetooth device called the Sidekick 2, that is used as a handheld device for controlling media playback and responding to messages. 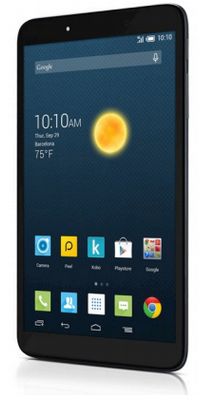