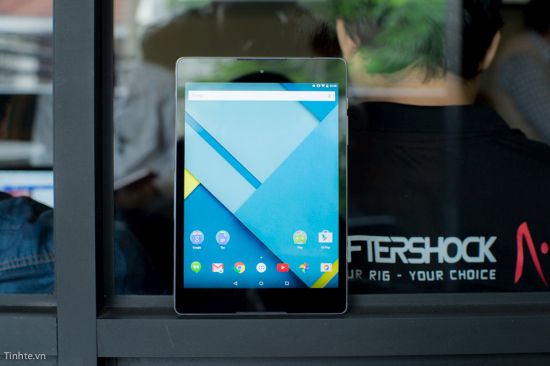 HTC Nexus 9 was announced yesterday by Google, as its flagship Nexus tablet, with Android 5.0 Lollipop on board. If you’re sick of renders, today we came across a series of hands on shots with the device, that looks quite sleek.

The product will hit the stores on November 3rd and it will be up for preorder on October 17th. It’s built of polycarbonate with a soft touch coating, that’s pretty similar to the one of the Nexus 7 2013. The device measures 7.9 mm in thickness and it weighs 418 grams, which may sound hefty, but the device is actually pretty elegant. Standing out from the design is a diamond cut metal frame that surrounds the edges and you’ll notice that discretely integrated at the top and bottom front area are BoomSound stereo speakers.

I also have to mention that as far as the format is concerned, this model reminds me a bit of an iPad (don’t call me hater), probably because of its 4:3 screen. It packs an 8.9 inch IPS display with a 2048 x 1536 pixel resolution and inside we find the dual core Tegra K1 2.3 GHz 64 bit version. 2 GB of RAM and 16 or 32 GB of storage complete the picture. So, is this the ideal Christmas gift or not?