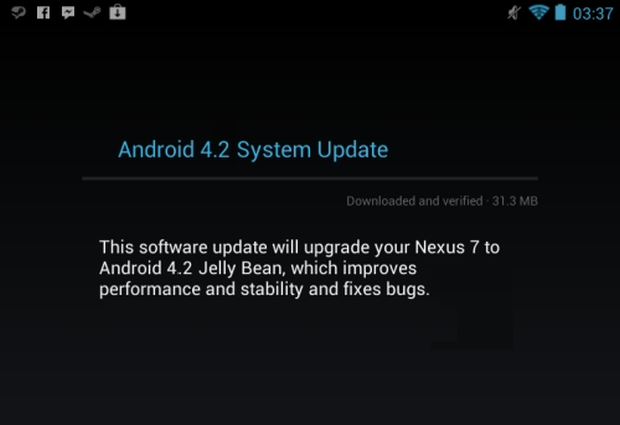 Android 4.2 was supposed to hit the Nexus devices, including the older Galaxy Nexus and Nexus S, as soon as the new smartphone and Nexus 10 tablet became available for purchase on the Play Store. Today is the day when the new devices went available in countries such as France, Germany, UK and later US for sale. The stocks depleted moments away after they could be purchased. There is still a good side to all this.

After the Galaxy Nexus was reported to get the update to Android 4.2, the new version of the OS, including lots of new features, went live for the WiFi version of the Nexus 7 as well. The 8 GB and 16 GB variants that could be purchased before Google announced the revamp are now slowly being updated to Android 4.2. This includes the very anticipated, tablet only compatible feature for having  multiple user accounts. The OTA file is compatible with the Nakasi variant of the Nexus 7, sold off the Play Store.

Android 4.2 Build JOP40C OTA file link has been extracted for the Nexus 7 and is available for download. You can use your recovery to install it and it should take you to the new version of the software. In order to use the file you must first be running Android 4.1.2 Build JZO54K stock, or else you will not be able to successfully flash it.

There is also the method of hitting Force Stop and Clear Data for Google Services Framework, found in Settings-Apps-All. The method sometimes forces the update notification to show-up.