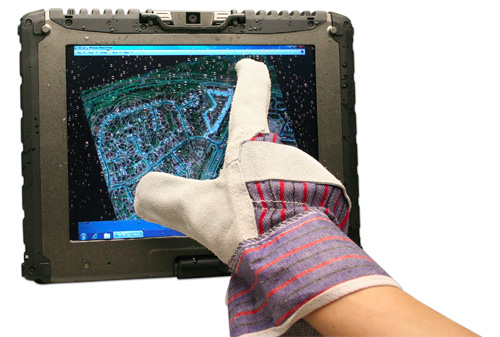 Getac is a brand that makes rugged notebook PCs, tablets and phones and the company has recently showcased a new type of touchscreen with multitouch support even for people wearing thick work gloves. The result will be an interface that relies on gestures, allowing the user to edit and move documents, zoom in and out of photos and rotate them.

One of the first devices to feature this technology will be Getac’s V100 tablet PC. The new type of touchscreen uses a rare resistive multi-touch tech, ideal for people working in extreme conditions or with heavy machinery. In case you didn’t know, the multi-touch screens are usually capacitive and they rely on the electricity delivered by the users’ fingers, usually blocked by gloves.

Getac’s display is able to support a 2048 x 2048 pixels resolution and comes with a touch sensor that reports 100 points per second with a response time smaller than 35 ms. Windows 7 is supported via the screen, that’ll be out at the end of this month.