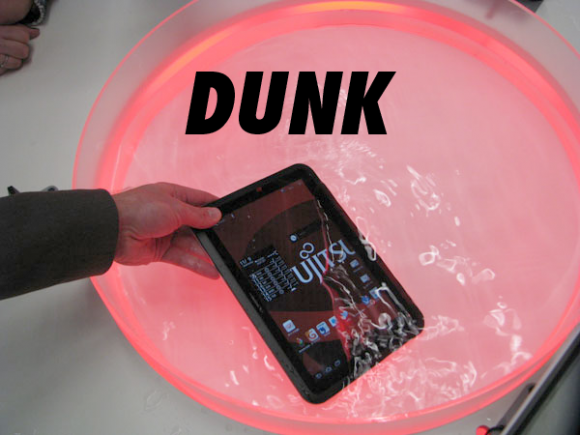 There are few tablets out there that are rugged and even fewer that claim they’re indestructible. We have the Panasonic ToughPad and now a new model called the Fujitsu Arrows LTE Tab, an Android slate that can be submerged under water completely without problems.

This is a 10 incher model with a 1280 x 800 pixel resolution, Android 3.2 Honeycomb on board and Tegra 2 as the CPU. There’s also 1GB of RAM available, as well as 16GB of internal storage, a microSD card slot with support for 32GB of extra memory, a microUSB port and a microHDMI port. The CPU inside is the usual 1GHz Nvidia Tegra 2, so the specs here are average but the external shell is the selling point, since it’s resilient.

Right now, this model seems rather prone to diving not very strong shocks, so the Panasonic ToughPad A1 might actually be better. I’d have to see them side by side and run them over with a car to know that… Promo video below: