Cube is a pretty reputed tablet brand in China, but so far we didn’t quite get the chance to test its models. That changed in December, when we got the Cube i7 Remix slate and today you can check out its review below. This is a 11.6 inch tablet with Remix OS on board, the very first model with this OS that we test. 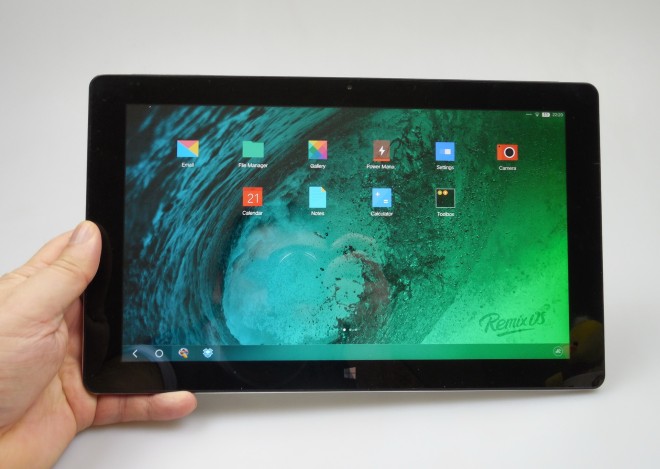 It’s an affordable model, priced at $196 on GearBest at the time of writing this review, although the price dropped as low as $180 at some point. It’s a massive device, meant for video playback and games and it’s still pretty slim, at 8.5 mm in waistline, which still makes it thicker than the Surface Pro 4 (8.45 mm) and iPad Pro (6.9).

At least it’s lighter than the 786 grams of the Surface Pro 4, with the 720 grams tipping the scale. However, the iPad Pro is once again skinnier, at 713 grams. The Cube unit has a good grip and it’s not very thick for its diagonal. The bezels that are very big make it comfy to hold the device for long periods of time, although the weight will wear you down after 10 or 15 minutes of gaming. 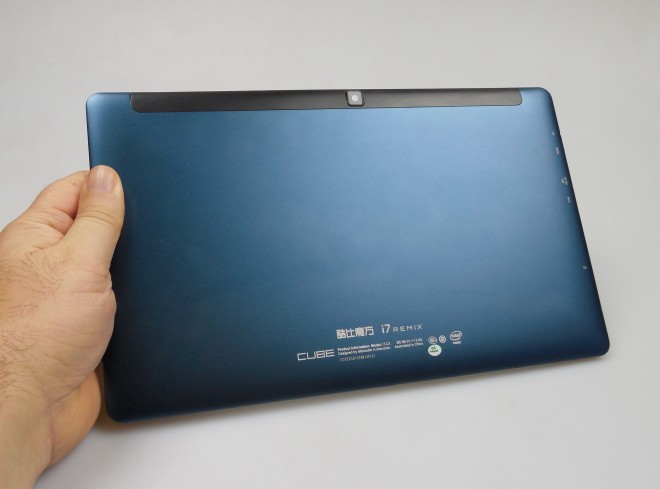 Made of plastic and metal, the slate has a solid build and out unit came with a matte blue back. Upfront we find the Home button with a Windows logo for some reason, front camera and sensors, plus the screen panel, that’s a bit of a fingerprint magnet. The back side only features the camera, while the top hosts the Power button and volume buttons, both slim and not very easy to find and press.

At the bottom we’ve got the keyboard docking mechanism, that includes some metal pins and two holes. I noticed that the metal edge of the Cube i7 Remix tends to chip easily when hit to rough objects and moving further, on the left side we find the bulk of the ports and slots: audio jack, mini HDMI, one microUSB for power and one for OTG features, as well as the microSD card slot. 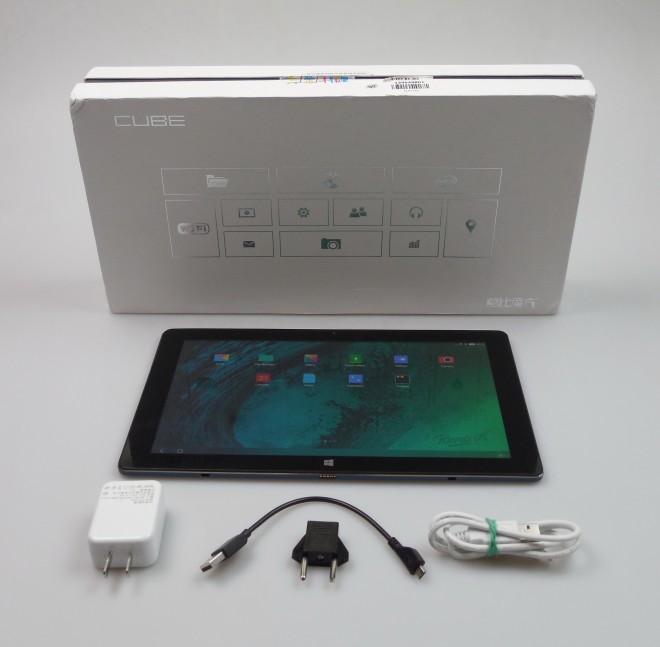 To the right there are the two speakers. Overall, this model delivers a premium feel and comfy experience, but it remains a massive and heavy product. Specs include an 11.6 inch IPS display with Full HD resolution, a quad core Intel Atom Z3537F CPU, clocked at 1.8 GHz, Intel HD Graphics Gen 7, 2 GB of RAM and 32 GB of storage.

There’s a microSD card slot on board, a 5 MP main camera, 2 MP front shooter and on the connectivity front we’ve got WiFi 802.11 b/g/n, Bluetooth 4.0, microUSB 2.0, GPS and mini HDMI. Sensors are the following: light sensor, G sensor and accelerometer. The battery is a 8400 mAh unit and it charges at 5V/2A. During our usual test, that involves HD video playback in a loop, with WiFi on and brightness at 200 LUX, we achieved 3 hours and 57 minutes, which is underwhelming to say the least.

It’s also the lowest result of all the reviews we did over the past years. We got beaten by the Samsung Galaxy Tab A 9.7 (10 hours and 13 minutes), Nokia N1 (8 hours and 32 minutes) and Evolio Go Fun 3G (4 hours and 22 minutes). In PCMark, the other battery test, that simulates continuous usage we got to 3 hours and 21 minutes, which is also quite low. 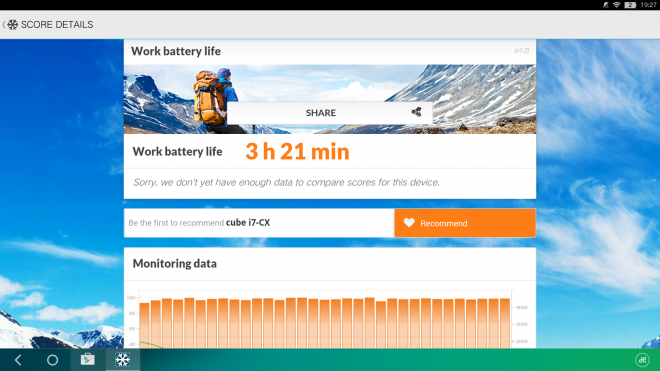 Still other tablets charge faster: Nokia N1 (3 hours and 52 minutes), iPad Air 2 (3 hours and 40 minutes) and ASUS Transformer Book T100 Chi (3 hours and 14 minutes). The Power Manager from the Settings only lets apps run in the background, without any power saving features. Overall, the battery is a letdown and we move further to acoustics. 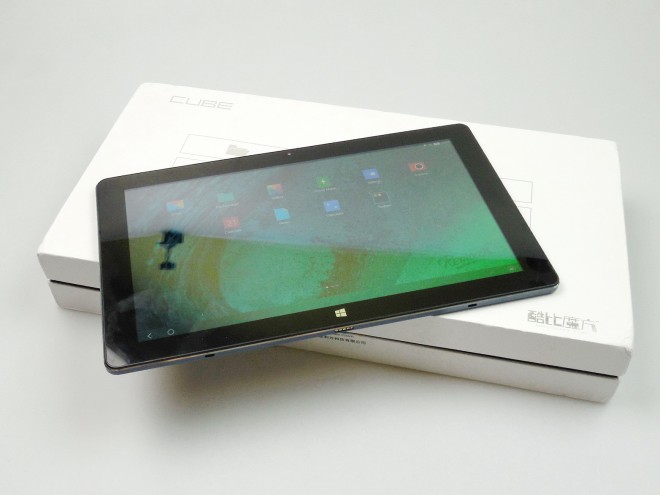 There are two side speakers here and Google Play Music serves as the stock player. The equalizer is pure stock KitKat and we’ve got genre settings, bass boost, 3D effect and 5 custom channels to tweak. The actual sound experience is loud, clear and crisp and the bass is very good. The speakers are great for games and music and they easily cover up a conversation in a room. 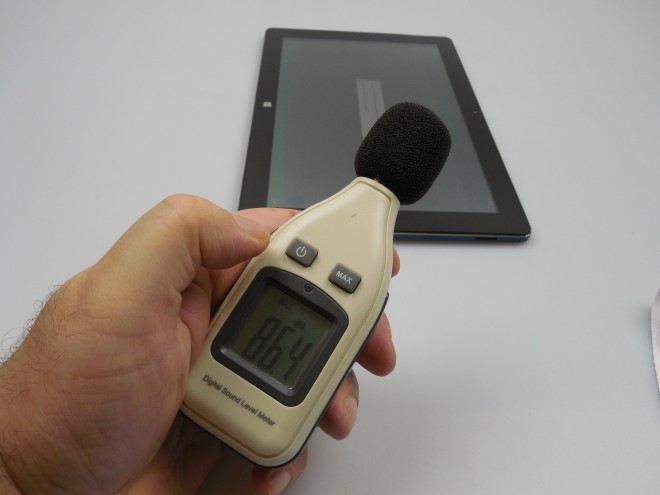 So, overall audio is good. Now let’s dissect the screen. This is a 11.6 inch Full HD screen, with an IPS LCD panel and there’s no video player here, so we had to resort to the Gallery app. The video experience is bright and crisp, the colors are realistic and vivid, plus the view angles are quite wide (178 degrees). Text look crisp and the screen is not very reflective.

Settings offered here are brightness, timeout and font. This device works excellently like a secondary screen, so if you multitask a lot, you can play a random video or documentary on this slate and place it on a stand, while doing work on your main PC screen. As far as the camera goes, the 5 MP shooter brings a minimal UI, that only includes a timer and front camera shortcut. 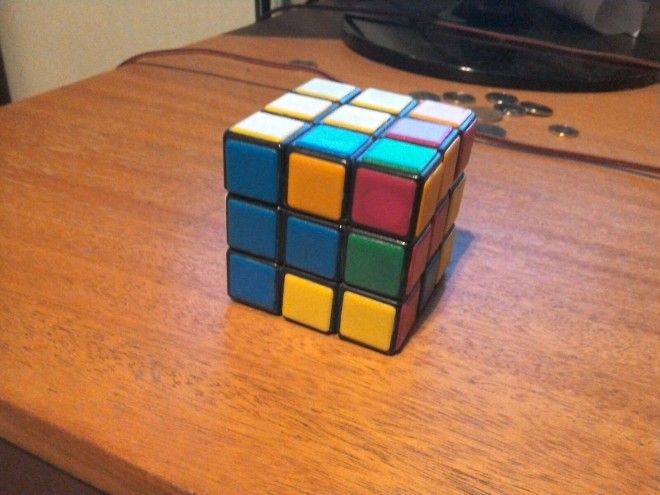 The camera is slow and quality is mediocre, even for such a massive unit. The most surprising aspect about the photo section is the total lack of photo editing options. We tested the temperature of this big screen device, reaching a very good 33 degrees Celsius, after playing the game Riptide GP2 for 15 minutes, which means the heat is dissipated in an excellent way. 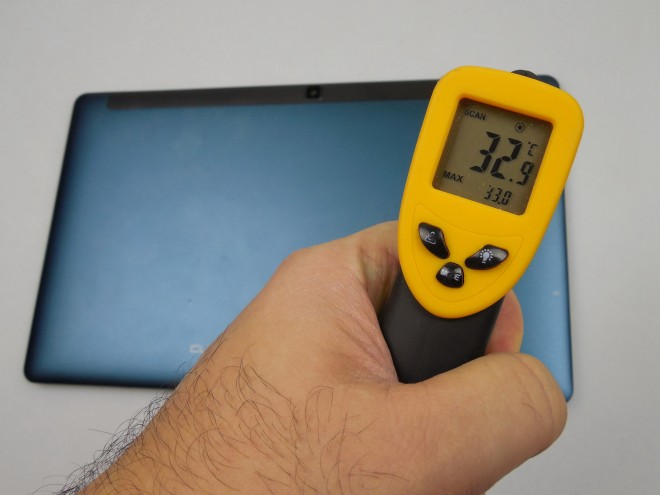 The web browser on board, the stock one has the screen oriented in portrait for some reason, so we had to resort to Chrome, that’s kind of slow. On the connectivity front, we get Bluetooth 4.0, WiFi b/g/n, GPS, microUSB for charging and microUSD for OTG. There’s mini HDMI and 3G only via external modem. keep in mind that this model doesn’t have 3G or NFC, plus WiFi a/ac.

re wins 6 out of 11 tests, achieving good results, but the GPU is so-so. Riptide GP2 ran without a problem, albeit we ran into some freezes. One of the most interesting aspects regarding this device is the software. It runs Remix OS 1.0, based on Android 4.4.4 KitKat and it’s a flavour of Android meant to look like a desktop experience.

Fresh icons and fresh UI are available here, with a flat and minimal UI. We’ve got a taskbar included, that can be hidden or shown, plus it can show a series of apps, that can be kept handy. The UI is fluid and the taskbar lets you alternate between the apps include in it and already opened, for the sake of multitasking.

Back and Home buttons are included on the left side of the screen and there’s also a Menu button on the right, with a Memory Cleanup feature and a Phone/Full Screen resize option. The Phone mode makes the full size app a smaller one and also lets you have multiple minimized windows on the screen at the same time. The dropdown portion features notifications and Quick Settings, the latter shown as tiles, that are flat and colorful.

In this area there’s a brightness slider, plus shortcuts to options like GPS, Auto Rotate and Screenshot. If you keep the screen pressed, you can change the wallpaper. There are no resizable windows in this version and we sure wish we had the new remix OS version. Cube i7 Remix supports keyboards and mice, including CTRL + V shortcuts, right click and more. 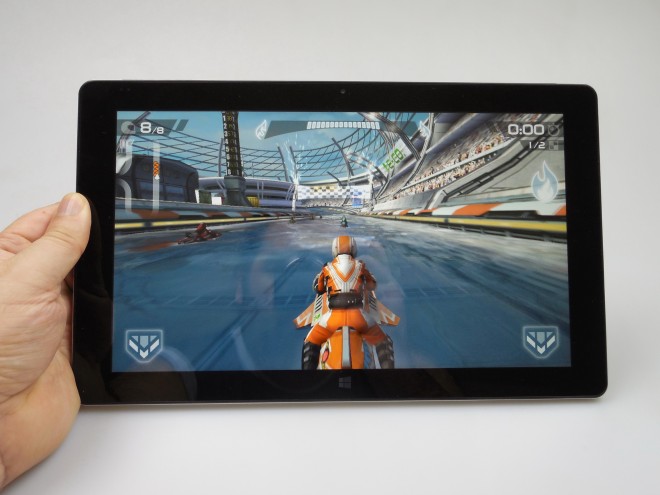 There’s not much bloatware here, which is a good thing. The most annoying bit is that some apps open in portrait mode, but overall I was content with the software. And now let’s see the Pros and Cons.

Overall, Cube i7 Remix is good for a short period of binge watching, on account of the battery and also gaming. It’s got an atypical albeit comfy UI, much comfier than the regular Android on this format. The screen is good, audio good and this feels more of a Home slate, rather than a truly portable unit. Check the price on Gearbest.com.