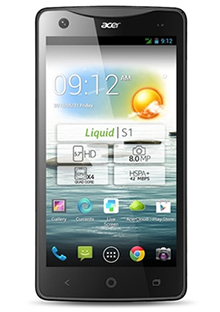 Acer is also a big part of the Computex 2013 event, not only ASUS and both companies seem to favour the phablet segment today. They both unveiled phablets, with ASUS showing the FonePad Note, while Acer unveiled the Liquid S1.

Acer’s Liquid S1 is the first real phablet from the Asian company, that’s been more busy with Windows 8 rather than Android lately. The S1 will be shipping from Q3 in France, Belgium, Netherlands, Ukraine, Russia, UK and Germany, followed closely by Italy and Spain. The price tag of the phablet will be around $455 and its specs include a 5.7 inch HD display and a quad core MediaTek processor.

The CPU is clocked at 1.5 GHz and we’ve also got Android 4.2 Jelly Bean on board, 1 GB of RAM, a microSD card slot and 8 GB of storage. The device will also come in a dual SIM version and it will pack a 2,400 mAh battery, plus dual cameras. MediaTek is a big deal now and expect more devices with its CPU inside.

Acer Aspire C All in One PC Debuts in USA, with...