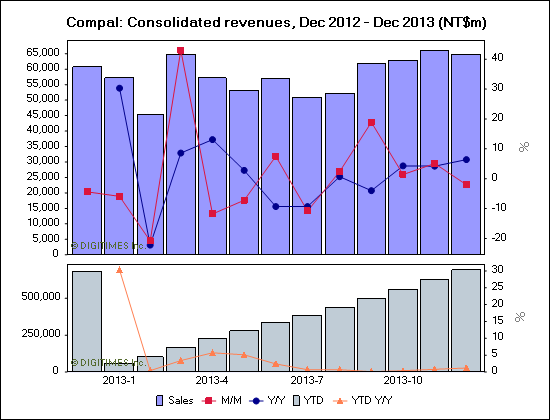 Compal Electronics has announced that it expects tablet shipments to double in 2014, reaching 14 million units, while the shipments of its notebooks are expected to grow slightly to 40 million units.

This is a major device maker, that has contracts with a lot of big brands, so its stats matter to us. Compal announced revenues of $2.15 billion for December 2013 alone, down 1.97% on month, but up 7.15% on year. They managed to ship 4.5 million notebooks and 900k tablets last month, both decreasing from November, which is odd for a big holiday month.

The shipments in the first quarter of 2014 are also expected to drop, as the employees in China take Lunar New Year holidays and labor shortages appear. The Taiwanese ODM recently boosted its production space by buying the Toshiba LCD TV plants in Poland and they aim at shipping 5-6 million TV units this year.

Compal already has orders for the iPad, according to rumors, but they decline to comment on it.