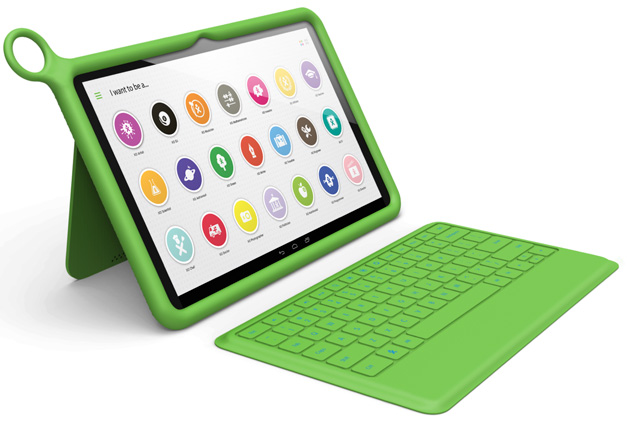 At CES 2014 we also got some kid oriented novelty, like the OLPC devices detailed below. One of them is a bunch of consumer kid tablets and also we saw some accessories from the same company.

Vivitar is the hardware partner for the OLPC mainstream slates, that sport upgraded specs compared to previous releases. So, the newcomers are the 7 inch XO-2 and the 10.1 inch XO-10, that don’t seem to respect any type of predictable naming pattern. The specs are similar on both models, with a similar resolution for example: 1200 x 600 pixels.

Inside both new OLPC tablets we’ll find a quad core processor, 1 GB of RAM, 8 GB of storage, Bluetooth and GPS. The 7 inch unit is expected to offer 7 hours of battery life, while the bigger unit goes up to an impressive 12. Android KitKat is present on both, in a tweaked version and we also get 100 preloaded English and Spanish apps.

Finally, the prices of the two models are $149 and $199 respectively. The accessories include microscopes and telescopes, plus a wireless keyboard.