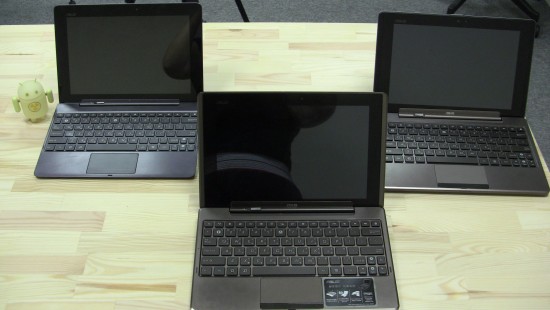 ASUS PadFone is one of the most talked about gadgets this year, thanks to its original format, that involves a smartphone inserted into a special tablet, that can also attach to a keyboard dock. Now the PadFone is compared to two other ASUS products you’ve heard about a lot, the Transformer Prime and the Transformer TF101.

The docking station looks the same, as shown in the video and the real difference here is actually the CPU power, that should be greater on the PadFone, more than anything else. You’ve probably seen those comparisons between the Qualcomm Snapdragon S4 dual core 1.5 GHz chipset and the Tegra 3 quad core unit all over the web and they seem to favour the Qualcomm unit. Of course, the Tegra 2 unit doesn’t need to be mentioned here. As far as design goes, the PadFone is much thicker than the Prime, actually very thick, but that’s explained by the slot for the smartphone.

All of these are 10.1 inch slates, so the screens are pretty much the same, except for the one on the Prime, that supports a superior 1920 x 1200 pixel resolution. The PadFone supports a 1280 x 800 pixel resolution and the original Transformer also supports the same one. As shown in the video, the PadFone tablet fits perfectly with the dock of one of the other models. More details and comparisons in the video below: