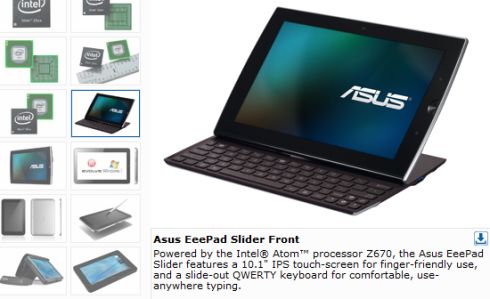 Now that we know the Eee Pad Transformer has been delayed in some countries, we can start to think about the next ASUS slate: Eee Pad Slider. This device will come in two CPU versions, according to Liliputing, that have come across an Intel spec sheet. Turns out the Slider will use either the Nvidia Tegra 2 CPU or Intel’s Atom Oak Trail.

Intel published a press page last week, as it launched the new Atom Z670 processor and that page included the devices to carry the technology of the new CPU. Among them there was also the Eee Pad Slider, but the page was closed soon after this leak. ASUS refuses to comment on this info and we’re left with the mere rumor floating in the air.

Does the Intel solution mean that we’ll be seeing a Windows 7 version of the device, or are we witnessing an interesting combo: Intel + Android?