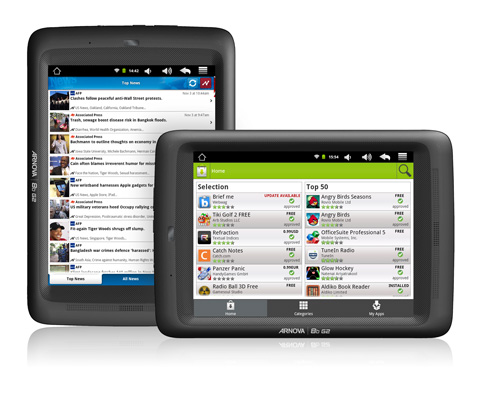 Archos is becoming a pretty popular tablet brand, with the Arnova series spearheading the increase in popularity. The reason for this is taht the Arnova line is cheaper thant he main series of Android tablets from ARchos. The latest member of this family is the Arnova 8b G2, a small update to the 8 G2.

This device runs Android 2.3 Gingerbread, uses an 8 inch display and doesn’t include any physical buttons. Could this mean that we’re headed towards an Android 4.0 update at some point? It might just be it… The Android navigation buttons are moved to the status bar, in lack of physicl keys. The case is ergonomic and the Archos Arnova 8b G2 comes with an 800 x 600 LCD display, 1 GHz processor, 512MB of RAM and 4GB or 8GB of storage. There’s also WiFi, Bluetooth, a microSD card slo, a front facing camera and a microphone on board.

No trace of price or release date for this model just yet, but speculations say it should be around the $180 mark of the standard 8 G2. France and the rest of Europe will get this product first. Archos promised ICS for the main tablets line as an update in Q1, so we’re also waiting for the lower end of the line to get the same treatment.