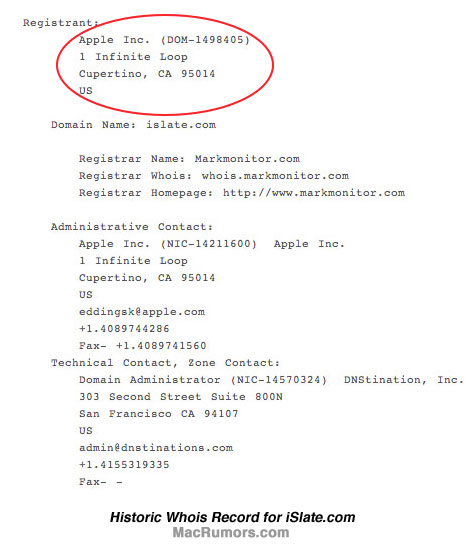 As we wait for the supposed January 2010 unveiling of the Apple Tablet, we’ve just come across a new rumour regarding the device: Apple acquired the iSlate.com domain name back in 2007, probably preparing for its debut years afterwards. This domain was originally registered back in October 2004 by the Eurobox Ltd. company, being bought by Data Docket, Inc. in 2006 and MarkMonitor.com in 2007.

The latter handles domain name registrations for companies like Apple and many more.

Usually such companies are used to hide the real brand that purchases a certain domain, as found by the folks of MacRumors. Apple was present as the owner of iSlate.com for a few weeks in 2007, then being switched back to the other company. Right now, the site points nowhere, but we can bet that in a few months’ time, we’ll be seeing a pretty neat website at that address.

Is iSlate the real name of the upcoming tablet?

iPad 2 Coming In Weeks From Now?