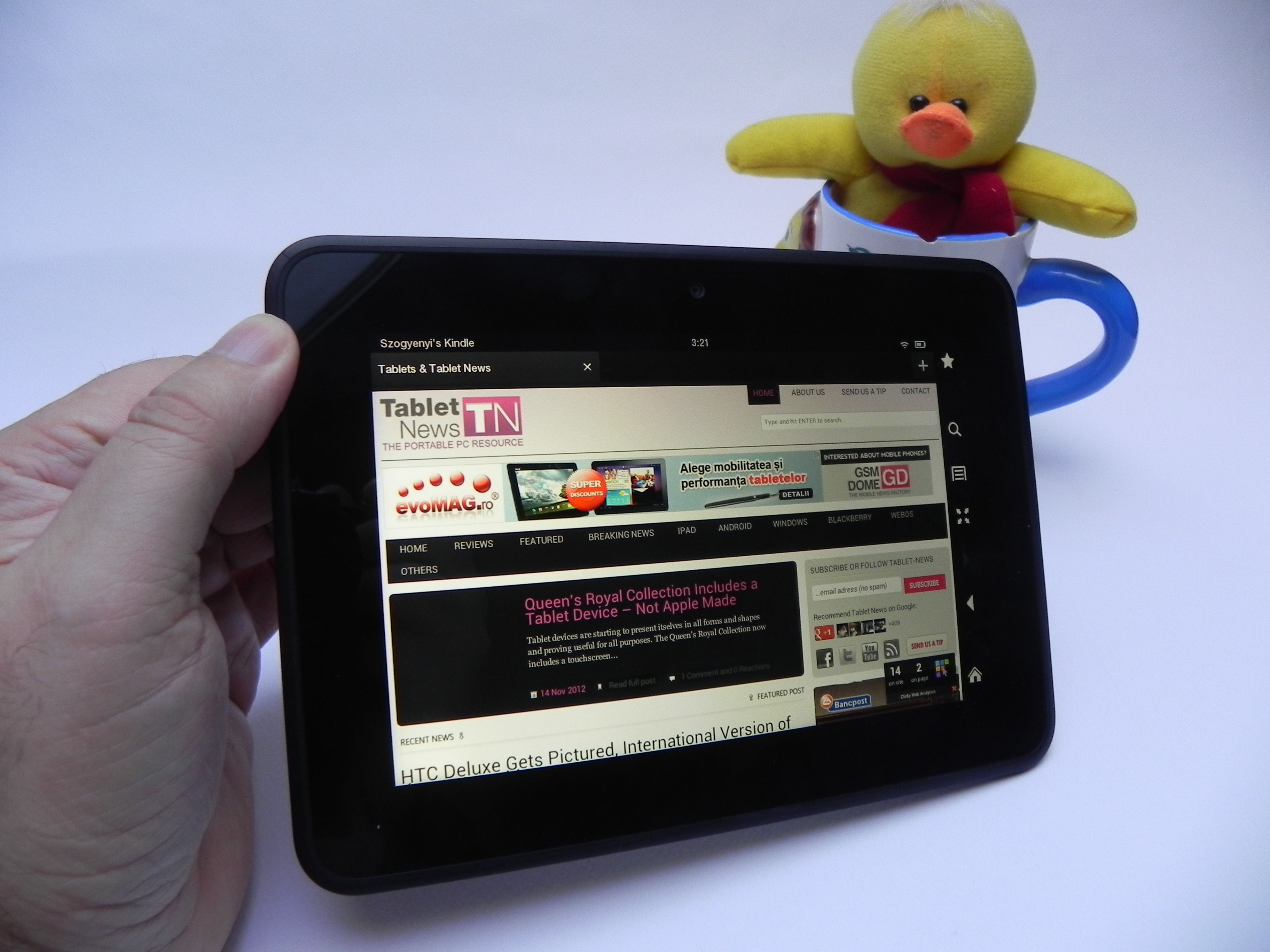 Amazon Kindle Fire HD is the latest version of the Amazon slate, that we reviewed back in 2011, now upgraded and with better specs. The 16 GB WiFi version with ads goes for $199.99 and it was launched in October in USA. Mind you that we’re writing this review in Europe, so we may be considered a bit biased of how little to none at all Amazon services are present in our area. 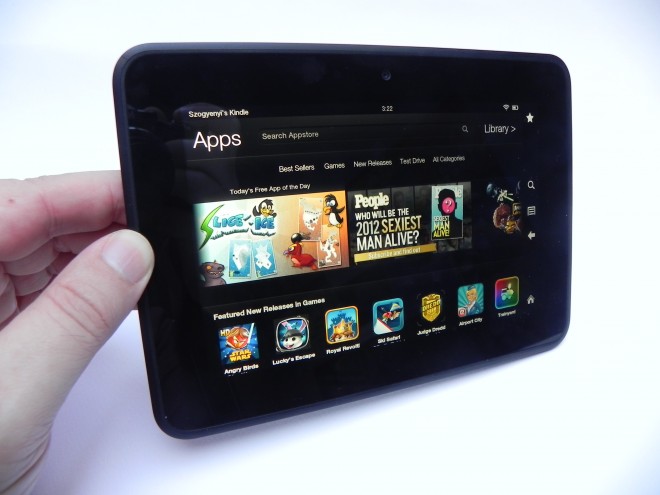 The design of the device involves a 10.3 mm waistline and a weight of 395 grams, that because of the compact nature of the slate feels more heavy than it is. It’s actually 50 grams heavier than the Nexus 7, in case you’re wondering, and quite a bit heavier than the iPad Mini. The device’s design really disappointed me, with its big edges, creaking case and the fact that you CAN NOT feel the physical buttons, not at all. At least, the grip is OK and the speakers at the back look kind of elegant, but only kind of…

We also get a front camera, that’s not at all integrated discretely. As far as hardware goes, the Kindle Fire HD proposes a 7 inch display with a 1280 x 800 pixel resolution, a 216 ppi IPS LCD screen and under the hood we’ve got a TI OMAP 4460 processor, a dual core 1.2 GHz unit, an ARM Cortex A9 actually with a PowerVR SGX 540 GPU. We also get 1 GB Of RAM, which is in fact about 700 MB, plus 16 GB of storage and a front 1.3 megapixel camera. The good thing here is the presence of a micro HDMI port and we should probably mention the usual frustration regarding the lack of a charger bundled with the device. 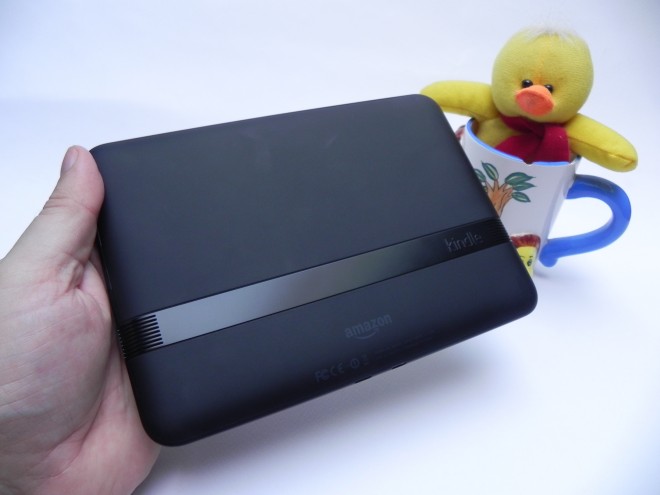 Continuing the specs list, the Amazon Kindle Fire HD offers an accelerometer, gyroscope, dual WiFi antennas with 40% Faster connectivity (Mimo) and dual band WiFi (2.4 GHz and 5 GHz). The battery inside is supposed to offer 11 hours of functioning time, according to Amazon, but for us it only reached 7-8 hours, so it’s around the same performance as the Nexus 7 in this field. Moving on to the multimedia performance analysis, what we get here are good colors, great view angles and 436 lux units when it comes to brightness of video playback.

This is lower than the first Kindle Fire, but higher than the Nexus 7. The device acts great in sunlight, so at least that’s a plus. It has less glare problems than many other tablets. On the audio side we’ve got very, very powerful speakers, that can handle both a heavy dubstep bass and an acoustic guitar ballad without problems. The Dolby Digital Plus technology works just find and the experience is very loud, while also not distorting any of the sound. 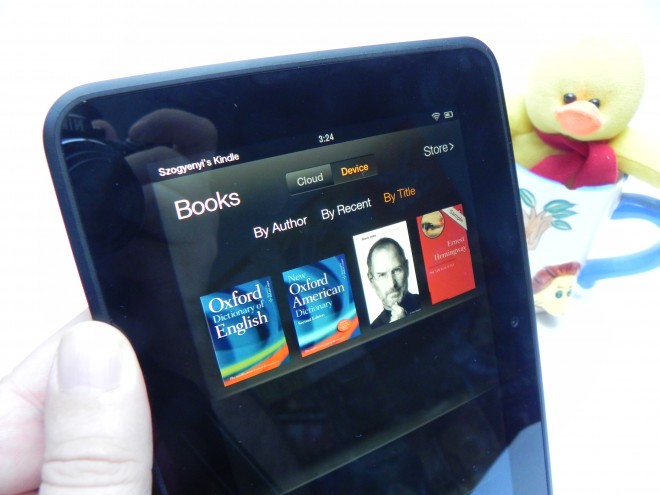 As far as software is concerned, Android 4.0 ICS is the name of the game, with the Amazon experience on top. We’ve got a notification area that leads to settings and the famous Carousel with the latest used content, including books, songs, movies, magazines and apps. Below that we’ve got related content, depending on each highlighted item. The main sections of the device as shown above the carousel and they include the Shop, Games, Apps, Books, Music, Photos and Docs.

The web browser is an evolved version of Silk, that still feels painfully slow and crippled by lag. The lockscreen ads are also here, but they didn’t bother me at all. If you want to do away with them, just pay $15 and they’re gone. We’ve also got email and contacts available, in a pretty simple and pleasant interface. E-Reading is the strong point of the device, with tons of tweaks and options for the fonts, brightness, background, font size, edges and various other inputs. 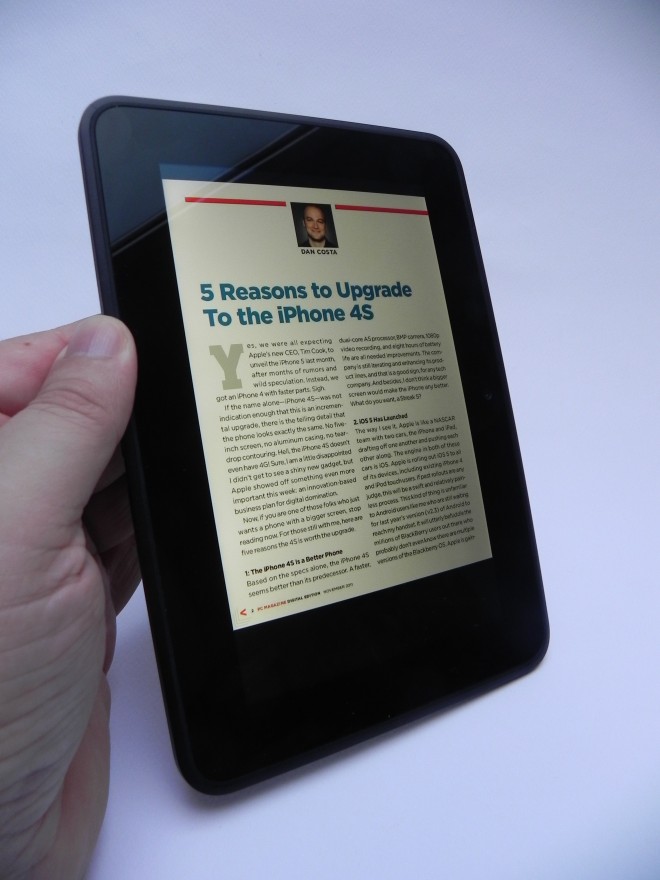 Amazon offers 120k movies and TV shows, plus 20 million songs and 50k apps. In comparison Google offers on Android 600k apps and they also offer 4 million books, while Amazon only has 850k. For more about that and some info about the features called X Ray and Whispersync, you’ve got the full video review below. Overall, this tablet was a bit of a letdown, since there was a general feeling of lag, sluggishness and simply the antique interface just didn’t cut it for us…

And now let’s see the pros and cons for the product! Here are the Pros:

And the cons are listed as follows:

For the design we give this model a 6.5 out of 10, for hardware a 7 and for UI and OS a 7 out of 10. The total is 6.83 out 10 and this product is, as I said a bit of a letdown. I was expecting much more from Amazon, but the point of view of the US user is much different, so I’m open to that area as well and if I had access to the entire ecosystem, the grade of the product would be about 2 points higher… maybe.