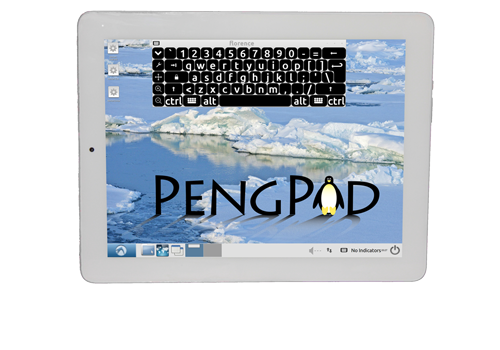 Eric Mack from Crave has been playing with a prototype of the fully open source tablet PengPod 1040, that is just about ready with its crowdfunding campaign and it’s ready to take flight.

The PengPod line is a series of Android and Linux dual boot tablets, designed by a small team from Florida that received funding on Indiegogo. The products are made in China with an Allwinner quad core ARM CPU inside. The PengPod team hit the news last year when it raised over 72k dollars over Indiegogo for a 7 inch and 10 inch Android tablet that boots into Linux on an SD card.

Soon a team was gathered around the project, but problems with suppliers led to the discontinuation of the first two models. The team was headed by developer Neal Peacock and they regrouped last month in order to launch a new Indiegogo campaign for a 9.7 inch PengPod 1040 slate. This one improves the original design and allows users to easily switch between multiple operating systems from the 16 GB internal flash storage.

There’s a new supplier in the mix and Peacok claims it’s now able to deliver the new PengPods by December at a price tag of just $249 for USA or $294 for outside US.