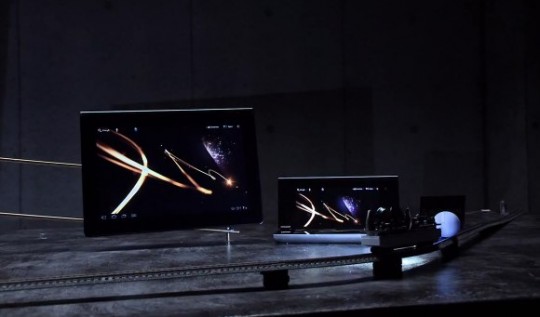 Sony’s S1 and S2 Playstation-certified tablets have recently been rumored for a September release and now they get their very own teaser posted online as a video. The theme of this clip is the journey of a tiny toy train in some sort of an inventor’s creepy den, filled with contraptions and with the two tablets waiting at the end of the line.

This is a slow-paced teaser that in its midst can become a bit annoying, but at least you get to see the two Honeycomb slates at the end. Once again we remind you that these are dual core Tegra 2 models, with the S2 sporting a dual display design, while the S1 is 9.4 inch media tablet with a design that looks like a folded newspaper at the top.

Sony S2 uses two 5.5 inch displays with 1024 x 480 pixel resolution. Expect to hear more about them in August, when they should be available for pre-order.