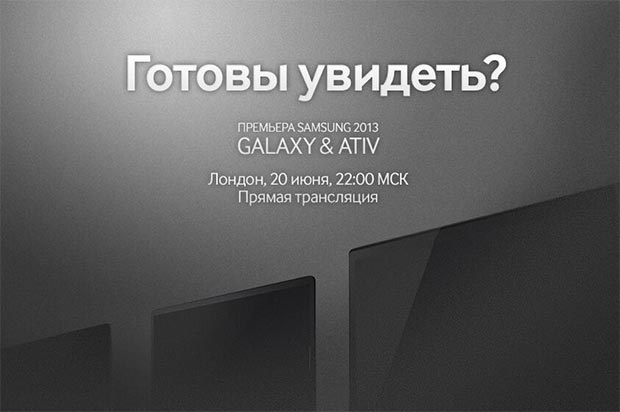 Samsung Russia has just posted a very interesting teaser for tonight’s Samsung Premiere event, including the names ATIV and Galaxy in the picture. Though the grapevine we’ve heard that we should expect a bunch of ATIV Books and ATIV One to be announced today.

Certain announcements include the Galaxy S4 Mini, Galaxy S4 Active, Galaxy S4 Zoom, plus the Galaxy NX and the ATIVs mentioned before. We’re only 4 hours away from the event right now and seeing some fresh hybrids between tablets and laptops would be nice. ASUS and Acer unveiled similar products based on Windows 8 at Computex 2013 and I have a feeling Samsung may try to rival the Transformer Book Trio with an Android/Windows 8 combo.

ATIV One doesn’t ring a bell to me, but it makes me think of a brand new Windows Phone 8 smartphone. I can see 3 silhouettes in the image, one of a bigger device, one of a device that feels like hybrid and finally a smaller unit. In the end we may be dealing with an official showcasing of the Galaxy Tab 3 series and their Windows 8 alternatives.