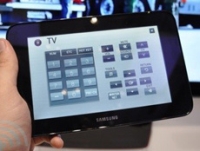 While Asus is readying an Eee pad, Microsoft showed us that neat Courier, Crunchpad got turned into JooJoo and Apple’s Tablet is as mysterious as ever, Samsung also joins the gang and is set on building a tablet of its own. Turns out that the first device of this kind will be a JooJoo-like tablet, with multitouch and 3D support.

Samsung promises to launch a couple of mainstream displays for products such as these and they also intend to convert the laptop and desktop screens to LED backlighting starting mid 2010 onwards.

Should be expect anything interesting from this brand during CES 2010, as far as tablets are concerned?