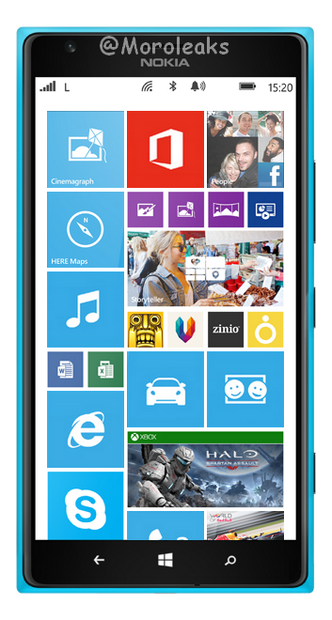 We’ve already seen the Nokia Lumia 1520 a bunch of times ahead of the launch event taking place on October 22nd. This is a 6 inch phablet that has leaked in both press renders and various other pics on the web. Today we get a new shot from @Moroleaks.

The source tweeted a cyan colored Lumia 1520, a device with a front panel that’s colored black, while the back is all cyan. The device will feature a quad core Snapdragon processor, a powerful 3390 mAh battery and a 6 inch Full HD screen. We already knew all of those, but now we also get some intel on a new feature called Glance Background.

The info comes from Martin Jansky, senior product manager at Nokia. Glance Background is the area behind the functional features like clock or notifications, that can be customized with a new image in the background. The idea is to show an image when the handset is pretty much off. You can even tweak the effects that are associated to the image popping up!