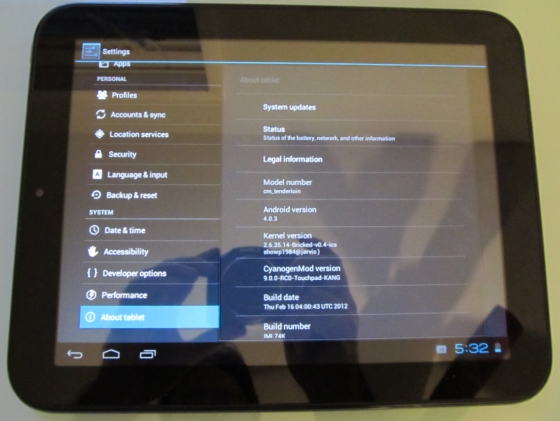 There’s no device out there that can’t get Android 4.0 now (or almost no device), courtesy of the CyanogenMod 9 ROM. As you know, this software has been trying to get a clean run on HP TouchPad for a while now and we’ve reached a more stable version, thanks to the nightly builds of CyanogenMod 9 Alpha, that are now available.

The nightlies mean that you’ll take CyanogenMod 9 Alpha 6 for the TouchPad and sync it with the main development section of CM9 for all the existing devices. This means that HP’s slate will get the latest updates and bug fixes. A new version is released every night, that’s where the nightly build name comes from. However, this doesn’t mean you’ll have to perform a clean install every night, so rest easy. The latest development comes from the guys at Teamwin, who created this Twitter account to push alerts and download links, but only for vital build releases.

These are unofficial builds, of course, with all the problems that such a feat involves. Major features such as video playback and camera support are still in the wait for the CM9 on the TouchPad, so you should keep an eye on that Twitter account I gave you. With HP recently admitting that they worked on Android for the TouchPad, maybe this time they’ll lend a hand.