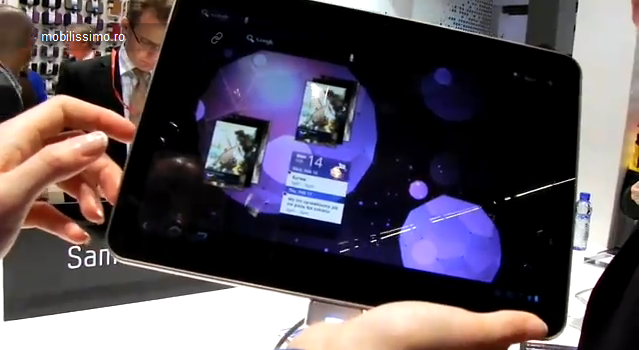 Zsolt Tamassy our sister site correspondent over at MWC 2011 in Barcelona has sent us a video of him playing with the new Honeycomb Samsung slate. The device is handled in the video below by the young lady with great British accent at the Samsung booth. We remind you that this is the Samsung Galaxy Tab 10.1 slate, that was announced recently at MWC.

The product is extremely thin, as the video shows and it’s lighter than the Xoom. At the inside there’s a 1GHz dual core CPU and around 1GB of DDR2 RAM. At the back there’s the premium camera of all tablets till now, an 8MP snapper, while at the front there’s a 2MP sensor that’s being triggered in our video, catching our editor “on tape”.

The battery on the unit is 6860 mAh and we expect this product to be sold by major carriers across Europe. Considering that Motorola Xoom was recently supposed to cost $1200, this product could also be in the $1000 price range. Galaxy Tab 10.1 has a standby time of 2000 hours and it will arrive in the UK in March.