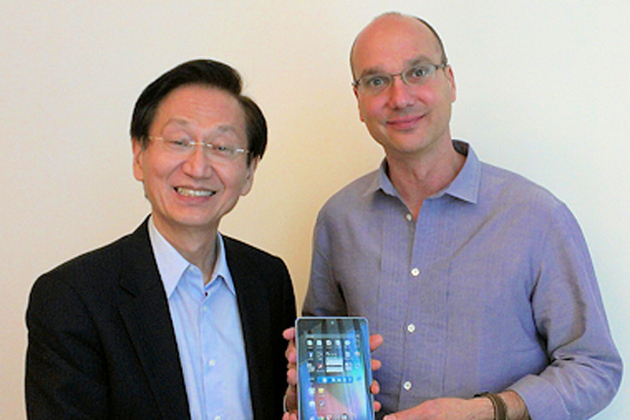 Google has taken a lesson from Amazon, who’s selling the Kindle Fire slate at a loss and reportedly the Nexus 7 Tablet could sell with a loss for Google as well. $200 is the price you pay for that device, so the search engine giant won’t gain anything from this, well unless you count the more expensive units with more storage and the profits from the Google Play sales.

ASUS chairman Jonney Shih and Google’s Android chief Andy Rubin (pictured above) have revealed that the Nexus 7 was being sold at cost and it was built in under 4 months. Rubin praises ASUS for moving so fast, although honestly speaking, many people think that this tablet is only a remade and recycled MeMo Pad slate. The advantage of the Google Nexus 7 is that it packs a quad core CPU, compared to the Kindle Fire’s dual core processor and also it has a cool resolution of 1280 x 800 pixels, a laminated screen with great viewing angles.

The two officials also said that when the device gets sold through the Play Store there’s no margin. There will also be retail sales, so rest easy about that. Google also absorbs the cost associated with the marketing of the product, so in the end they could be losing money on the slate, rather than gaining… I guess that they’ll make that up from the movies, music and books they sell in the Play Store.