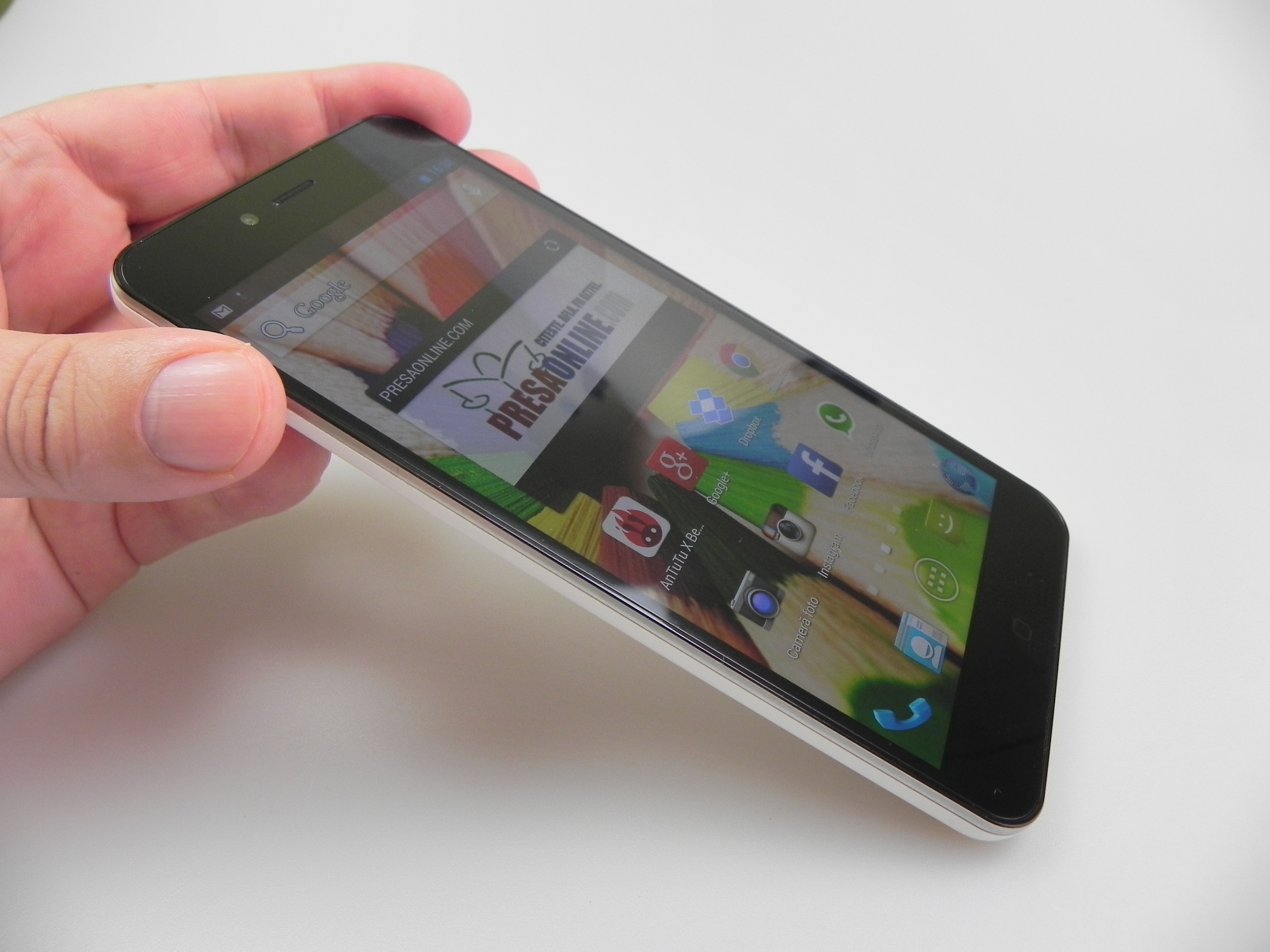 The Evolio X6 is a 5.5 inch phablet with an octa core processor and it has been the topic of leaks and rumors ever since February. This product was finally launched at the end of March and this one is a Romanian branded device, a version of the Asian model LTJ X3. 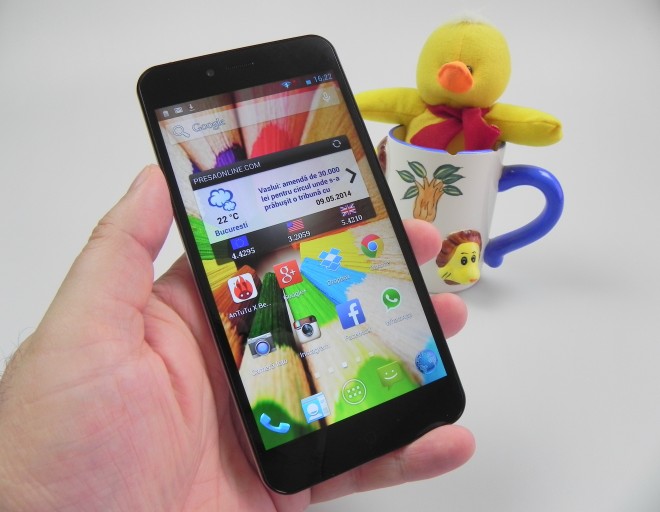 The price tag here is $425 and I have to mention that this product came to us in a very slim box, that didn’t also include headphones. The handset measures 7.8 mm in thickness, so it’s very slim for its diagonal and it weighs 180 grams. The design is pretty pleasant and we’ve got a plasticky and glossy case, with a small screen bezel. This smartphone offers good grip, it has a metallic ring around the edges and there are also metallic buttons with good feedback.

The design is solid and the Evolio X6 features an audio jack at the top, that had a special plug in it, as shown in the unboxing. That plug was actually the metallic key, needed to open up the SIM card slot. Speaking of which, this is actually a tray that hosts two SIM card slots, one micro SIM and one nano SIM. At the bottom of the device there’s a microUSB port and what look like two speakers, but in fact there’s only one speaker, on the right side. 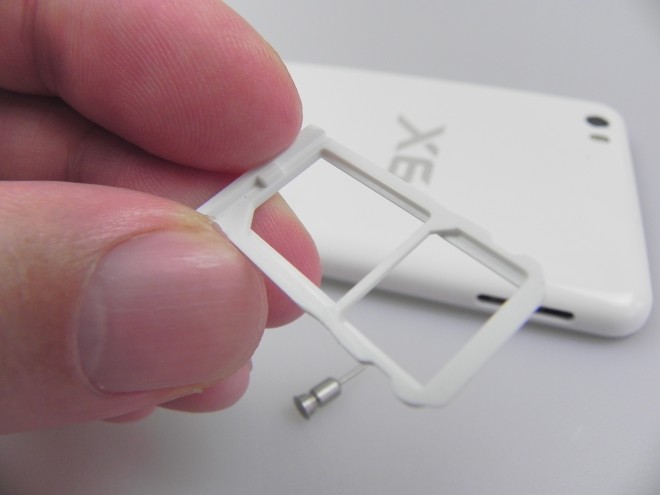 The left one is only for show, to make the design more uniform. On the left side there are the SIM card slots, while on the right we’ve got the On/Off button and volume buttons. At the back there’s the camera and LED flash plus microphone, while upfront we’ve got the camera, sensors, earpiece and the most beautiful capacitive buttons I’ve ever seen. They pattern is truly sci-fi and looks very nice. The Home button has a vibe that reminds me of the Home button on the iPhone and overall the design is appealing, sort of like a mini tablet. 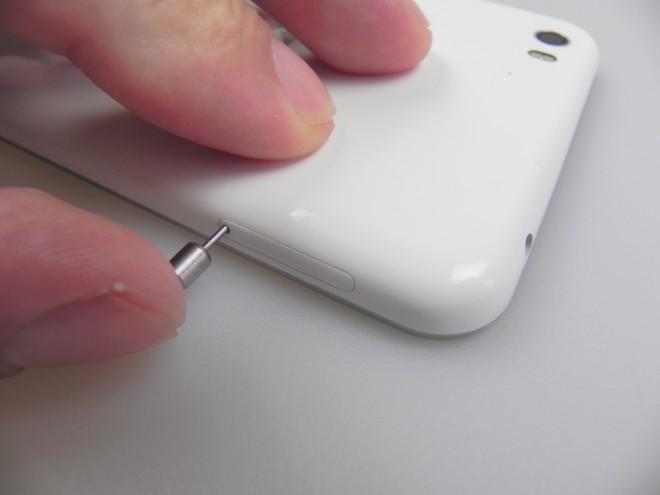 I should also mention that Evolio X6 comes with an accelerometer, digital compass, G sensor, brightness sensor and proximity sensor. The battery is a 3150 mAh unit, that in our test reached 5 hours and 37 minutes of HD video playback, with WiFi on and brightness at 50%. That’s pretty weak in my book and this model takes about 3 hours and 15 minutes to do a full charge. There’s CPU Power Save as an option in the Settings and overall, as I said this is a weak battery.

Now, moving on to audio, this product offers support for FLAC, MP3, OGG, WMA and WAV and it relies on the stock Android player. It has an equalizer with bass boost and 3D effect, plus all the standard options you already know. The volume is pretty loud, the sound is crisp and clear and the bass is not so good, I have to admit. The acoustics are fine, so you can enjoy your tunes on the go and I can’t say the lack of headphones is a big deal, since everyone has a pair of those stashed at home. 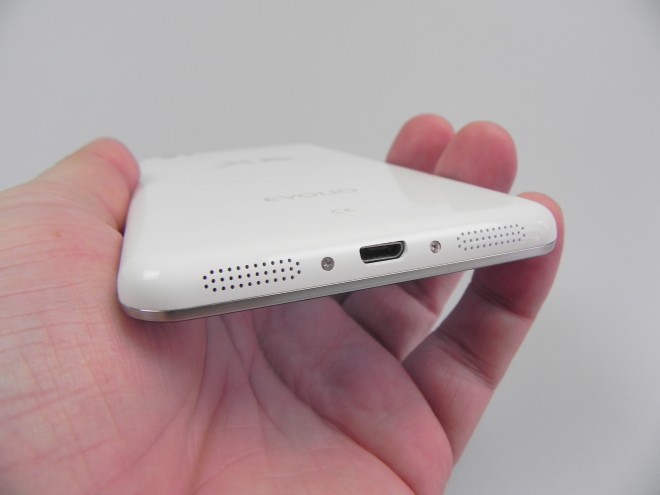 We’ve also got FM radio on board, with the ability to record tunes and also to output radio via the speaker. The Settings area also includes the audio profile area, with audio enhance options. Moving on to the screen, the Evolio X6 is a 5.5 inch IPS device with a Full HD resolution. The video player does AVI, FLV, MKV and MP4, plus WMV. While watching the videos you’ll notice vivid colors, a slight oversaturation and good brightness. Wide view angles are offered here and this is a good display overall. 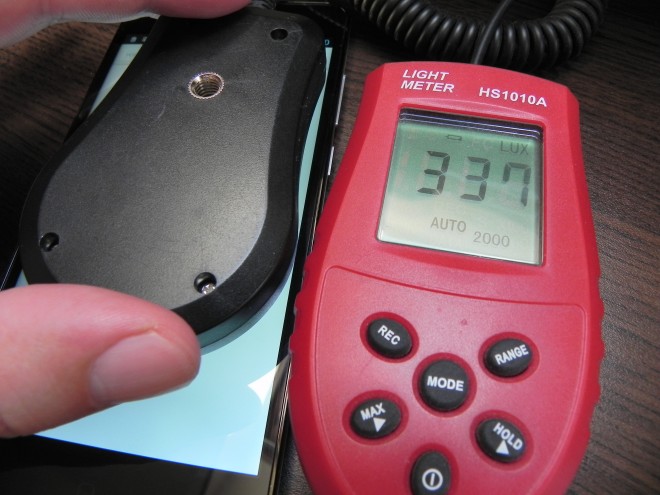 What I also noticed during playback is that the audio is very good when watching video. The pixels are of the RGB Stripe kind and the brightness level is 337 lux units on white, which is about 30 less than the Xperia Z2, which is considered to have a good display. This means the screen is good, but too bad is uses up so much power. The Settings include the Clear Motion option, that increases video fluency. Another feature you can activate is Breath Light, that offers an intermitent flicker of the Home button in the rhythm of a human breath. 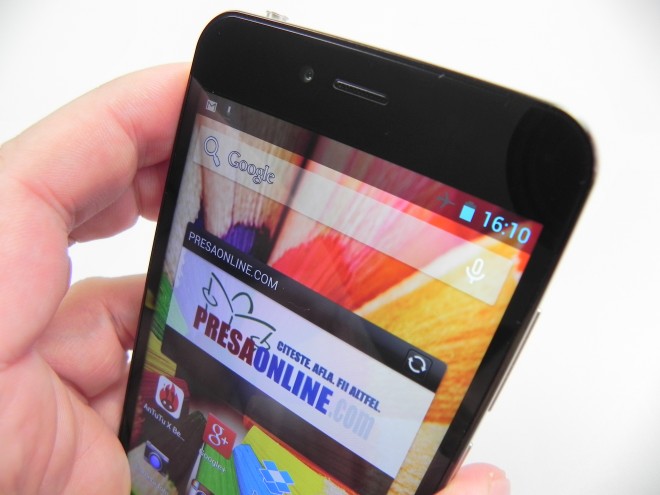 There’s also the Smart Wake feature, allowing you to double tap the screen to wake up the phone and there are a few draw based gestures to use. For example, you can draw a C for Camera, swipe right for the next song or draw an O for the phone feature. In conclusion, the screen is quite good and now we’ve got a lot to say about the camera. This is a 13 megapixel camera with a dual LED flash and the UI is not the stock one, but it’s rather ugly and old. On the left side we’ve got the front camera shortcut, flash option, settings and on the right there’s the shutter button, video button and the modes, plus gallery shortcut.l

You can do 4x zoom and the UI has a slight lag that may annoy you. In the settings area you can find stuff like GPS, exposure, color effect, scenes, white balance, image properties (sharpness, hue, saturation, brightness, contrast), anti flicker and zero shutter delay. You can do voice capture, meaning you can just say Cheese to trigger a picture. Face detection is also here, as well as a self timer and continuous shooting at up to 99 shots at once. 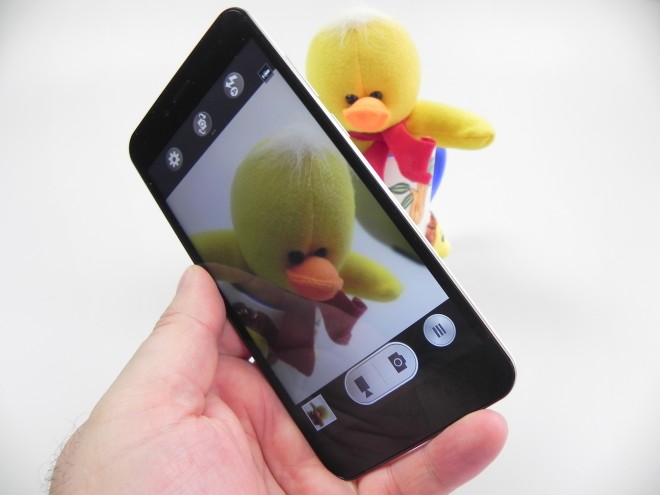 The picture size is 13 megapixel in 4:3, 12 MP in 4:3 as well and 9.5 megapixels in 16:9. ISO goes up to 1600 and in the video area there are options like EIS, microphone, while the audio offers options like meeting and normal. Time Lapse interval, effects and video quality (low/medium/high/fine) are also included here, for you to play with. And then come the camera modes: photo, HDR, panorama, MAV (3D image), ASD (automatic scene detection), smile auto capture and motion track capture.

I should probably mention that the pictures I’ve taken using this phone were done on a cloudy day. The colors are good, the pics are reasonably bright and the HDR is pretty good. Panorama looks OK and the macros with the flowers are nice as well. Sometimes parts of the pics are inexplicably blurry, but I really like the realistic colors. The level of detail is decent and this 13 MP shooter actually behaves like a very a good 8 megapixel camera, which is not exactly a compliment. 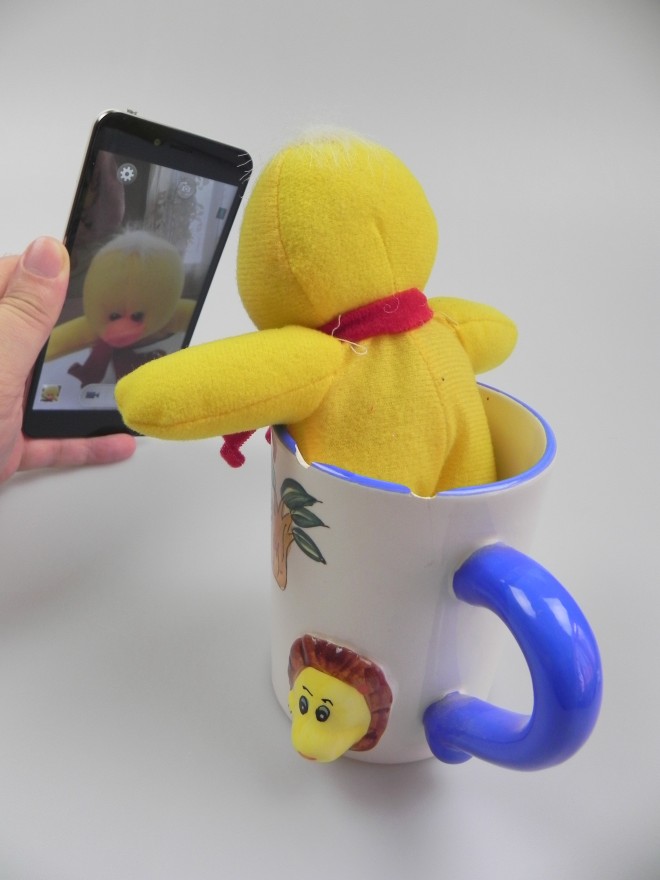 The quality of the capture is about the same as the one of the Galaxy S III and the strong flash has a tendency to affect the image. There’s a green hue that appears in the darkness, for example. Overall, the pictures are OK, but nothing more than that, once again OK for a cloudy day. The 8 MP selfie camera is also good for what it’s supposed to do. The video capture only happens in 3GPP, that to me is not exactly my favourite format.

You can do Full HD 30 FPS video, with the result being 17 Mbps files. The colors are vivid, the detail is good and the stabilization is pretty poor. The focus is easily lost sometimes and it all feels a bit too white-ish. The camera loses a lot of quality when zooming in, by the way. So, overall this handset is a letdown in the video capture area. As I said, the conclusion regarding this camera is that it behaves like a good 8 MP shooter, not like a 13 MP one. 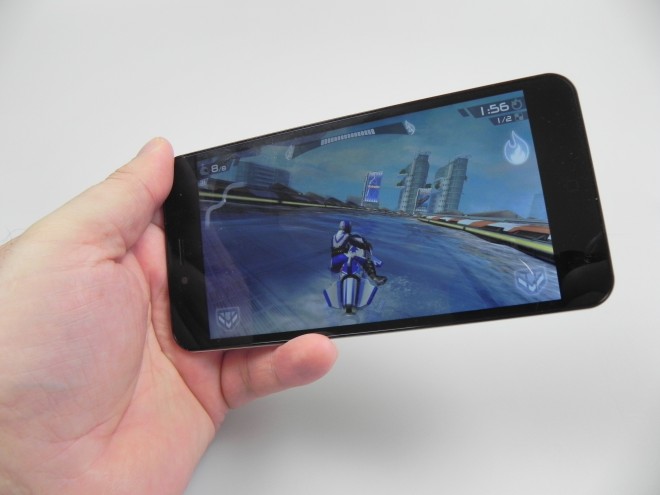 You can also do some photo editing, as shown in the video review. And now on to the performance. We achieved 48.7 degrees Celsius with the Evolio X6, after playing 15 minutes of Riptide GP2. The overheating is done under the camera on the left side. The OS here is Android 4.2.2. and it’s pretty much stock, without big changes from the usual. I wished it would have KitKat, though…

The web browser is a bit slow and the virtual keyboard is comfy, I have to say. I decided to compare the Evolio X6 with the HTC Desire 816 and the HTC One 2013, just for the sake of putting the octa core CPU inside to the test against last year’s flagship Snapdragon and the quad core affordable Snapdragon 400. The X6 wins in Quadrant, with 15k points versus 12k on the Desire 816 and almost 12k on the HTC One 2013, while in AnTuTu we also get an extra 5k points over the Desire model, while the HTC One beats us by 3k points. In NenaMark we scored 47.7 FPS, below the HTC One’s 61 FPS, while in Vellamo we won again, with 1983 to 1471 versus the HTC One. 3DMark was a letdown, since the Evolio X6 only got 6748 points, almost half of the HTC One score. Finally, in BrowserMark we got an extremely low 809 points. 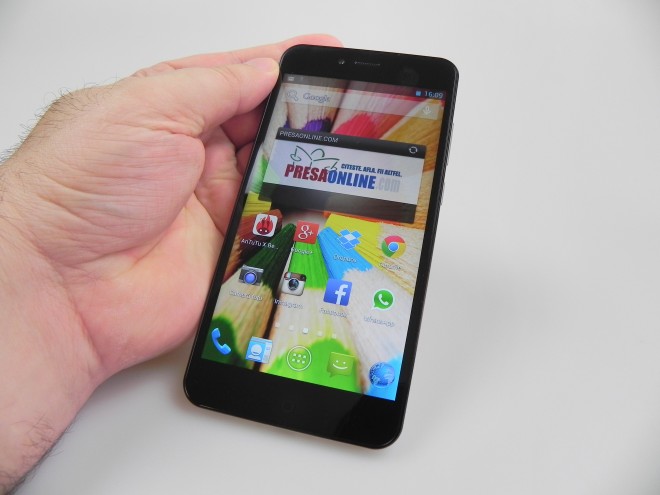 This means that the octa core MediaTek CPU We’ve got here is somewhere in between the Snapdragon 400 quad core and the Snapdragon 600, even beating the second in some aspects. In the meantime I can say we don’t suffer from lag and that this model runs demanding games without problems. The call quality is good and so is the signal. Moving on to the list of preinstalled apps, that includes a calendar, desktop wallpapers, Facebook, File Manager, Instagram, Movie Studio, News and Weather, Norton Mobile Security and SeeNow for movies and TV shows.

There’s also a To do list app, a torch and the famous Whatsapp. Now let’s see the pros and cons of this device.

ASUS PadFone Infinity A86 Gets Pictured, Could Launch in September