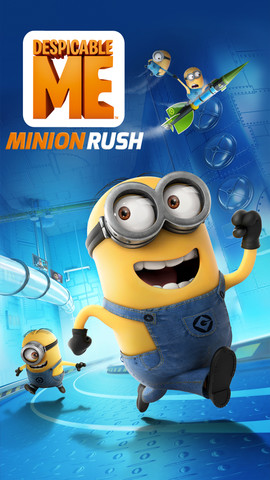 If you’re looking for a fresh summer game, then Minion Rush could be a good idea. It’s actually called Despicable Me: Minion Rush and it’s tied in with the brand new movie Despicable Me 2. The game is an endless runner with 3 lanes and it reminds me a lot of Subway Surfers.

The title is available for free and I tested it on the iPad Mini. I was quite surprised to see that it has a slight bit of lag occasionally, probably because of the cool 3D graphics and fast paced action. You start off in Gru’s lab, where you have to avoid rockets and hit minions, in order to become more despicable and then you move further into the streets of a normal, peaceful town.

There’s even a boss battle included in this Gameloft title and it involves battling it out with Vector as he fires drones at you. The game comes with funny and lovable characters and even pickups that will turn into minigames. One of them involves riding an unicorn vertically and another riding a rocket. The currency of the game is bananas, that you can spend in order to purchase various powerups and devices.

The game progress is saved in this endless runner, which is kind of cool. You can download the game from here and it gets a grade of 9.7 out of 10.