We know you’re tired of seeing Apple Tablet concepts, leaks, ads, photos and whatnot so we give you a sneak preview into the future of tablets UI. This video shows an incredibly finger-friendly and innovative way of controlling/unlocking a tablet PC. The user is supposed to manage the system with his thumbs, while holding the tablet with two hands:

The unlock screen shows basic info like the weather, time, a calendar and probably a bunch more data if you add widgets. There are two sliders included in the unlock screen, both used to unlock the device and relying on your right/left handed nature.

Overall, the interface of the device looks like a hybrid between HTC’s TouchFLO 3D and Apple’s iPhone OS, plus a touch of Mac OS. 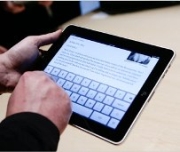