The wave of Android 5.0 Lollipop updates continues, today with the Sony Xperia Z2 Tablet. Sony also confirmed that the Z Ultra phablet will get the fresh software next week. The update available right now for the Xperia Z2 and Z2 Tablet comes in version 23.1.A.0.690 and it’s available in India. 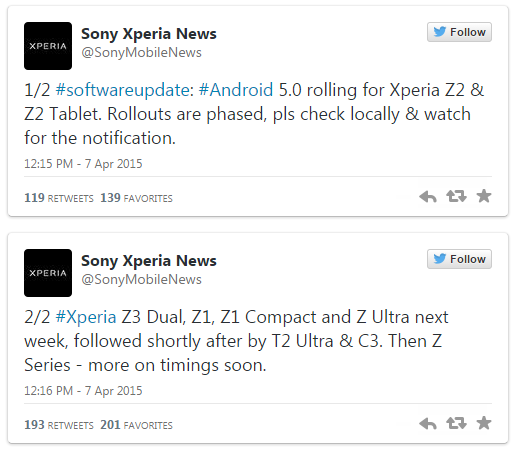 Last month we had a similar release for the Xperia Z3 and Z3 Compact and Sony announced Lollipop will be coming to the Xperia Z1, Z1 Compact and Z Ultra next week. The fresh software brings Material Design tweaks, new icons and fonts, a more fluid UI and a new look for notifications and the lockscreen. There are multi user profiles and a guest mode included, plus fully customizable settings.

There’s better storage control and the option to easily move the apps from internal memory to SD card. Android 5.0 for the Xperia Z2 Tablet will also offer better battery management and some bug fixes. How about the Xperia Z3 Tablet Compact? Last we heard, Android 5.0 was coming on it at the end of March, but there are many users reporting they haven’t received it yet.