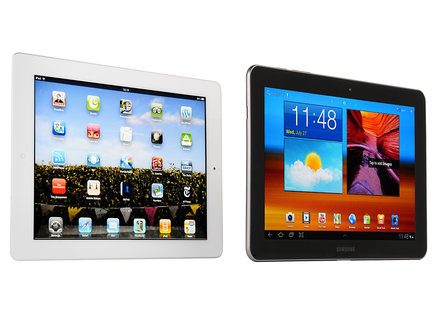 I’m sure you’re as puzzled as I am by the fact that it’s been a month since Apple won the trial against Samsung, but the Galaxy Tab 10.1 was found “innocent”, so to say. Even so, the tablet is still banned, which is not OK, considering the product doesn’t breach any intellectual property. It was only this week that a US appeals court ruled that a lower court should reconsider the ban.

The Galaxy Tab 10.1 has been banned for a while now, at Apple’s request. The injunction was started ahead of the trial between Apple and Samsung and although the Cupertino giant recorded a victory, they didn’t win on account of all devices they had listed. The jury found that Sammy doesn’t violate the patent for tablet design and the South Koreas instantly asked for the ban to be lifted. District Judge Lucy Koh said that she couldn’t do that, because Samsung had already appealed the final decision.

Koh can now reconsider the ban in question and honestly I think it’s a bit too late to worry about the Galaxy Tab 10.1. We’ve got the Galaxy Note 10.1 on the market, while older tablets are getting Android 4.0 ICS or even Jelly Bean, plus the Galaxy Note II is coming, so as long as they don’t ban those, Samsung has enough cash cows.