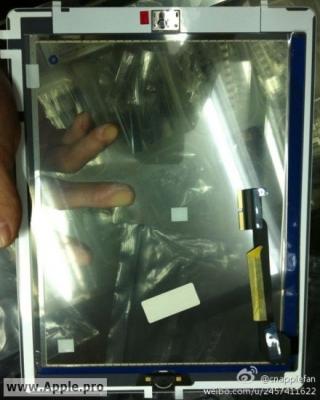 The iPad 3 is going to be a thicker iPad 2, that’s the general idea and also it’ll be a tablet with a Retina Display, better camera and a new quad core or dual core Apple A6 processor. The image below is a supposed iPad 3 front glass spy shot, giving us even more insight into the slate that’s supposed to debut on March 7th, according to rumors.

The image was discovered by Apple.ro, a reliable source for Apple hardware rumors and this glass part has the same 9.7 inch diagonal as the one of the previous iPad. The home button and round bezel are exactly the same, but if you compare the iPad 2 digitizer to the one on the new slate, the iPad 3 has a longer ribbon cable going to the side of the display. Other than that you can’t really tell which part belong to the iPad 2 and which to the next gen slate.

The iPad 3 is supposed to support a 2,048 x 1,536 pixel resolution and a couple of microscope tests with a display panel proved that it does double the resolution of its predecessor. Samsung is the one manufacturing this high res screens and not Sharp or LG Display, as speculated. Of course, Apple may also be using multiple suppliers to make its screens, so that it won’t rely on a single company, especially one that it has beefs with. Some media sources are saying that the resolution mentioned above doesn’t qualify as Retina Display standard…. well, I say that they’re not right.

A Retina Display is the one that packs in enough pixels to that the eye can’t discern each pixel in part. Retina means that at least 300 pixels per inch are feature on a 3.5 inch display held at 12 to 15 inches away. The iPad is held at 15 to 18 inches and if you do the math, Retina Display is achievable here at 240 pixels per inch. The result is that with a 2048 x 1536 res and 9.7 inch diagonal, the new iPad has 264 ppi at 15 to 18 inches, which is Retina quality.