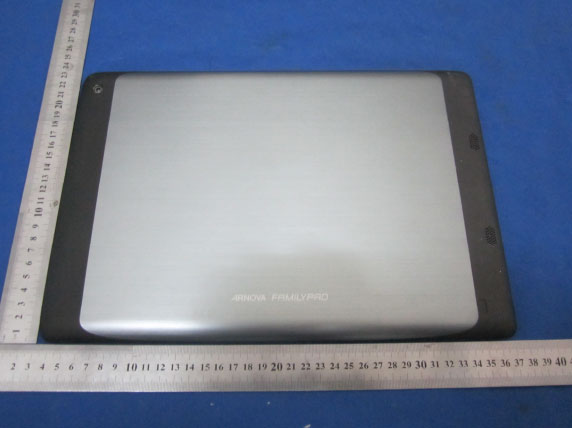 French tablet maker Archos has launched about a year ago a tablet series called Arnova. This one includes affordable slates, with decent prices and specs, that anyone can buy. Now this series gets a new member, the FamilyPad MW13. This model has just reached the FCC, where’s it’s been photographed, tested and torn down.

The design lines of the chassis are not that different in comparison to the Archos 97 Carbon, part of the new generation of Elements tablets. What’s unusual about the Archos MW13 FamilyPad is the huge 13.3 inch display, but we’ve seen Toshiba pulling a similar stunt recently, so nothing is surprising anymore. The Archos new device supports a 1280 x 800 pixel resolution and it comes with a front and back 2 megapixel camera, volume keys, a mini HDMI port and two micro USB ports.

There’s also a microSD card slot on board, an audio jack and 1GB of RAM. The brain of the slate is a SoC AllWinner A10 processor, an ARM Cortex A8 1 GHz unit with ARM Mali 400 GPU. We also get 16GB of storage on this device and Android 4.0 ICS the OS, while the battery is an impressive 10.500 mAh unit. No trace of price or launch date.