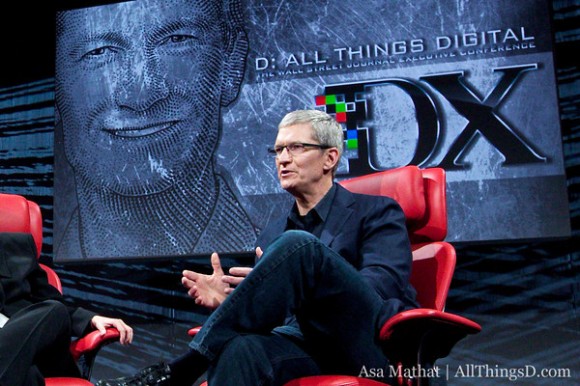 Tim Cook, Apple CEO was recently part of an interview with Kara Swisher and Walt Mossberg of All Things D at the D10 conference. The Apple leader had his first interview of this caliber and took the opportunity to address some rumors about future Apple products and criticize Microsoft’s approach when it comes tO Windows 8.

Mossberg asked Cook why he thought that Microsoft was doing it wrong, with the idea of putting the OS on devices that are hybrids, like notebooks with two touchscreens. Cook said that he views the PC and tablet as different things and that you can do things with a slate that on the PC aren’t so easy to do. This idea alone lets you know that Apple won’t be launching any touchscreen MacBooks this year at WWDC. Also, the Apple CEO didn’t let anyone know what kind of products we’re expect to see at the event, being mysterious as usual.

He did claim that “people will like it” and mentioned that he uses his iPad more than his notebook, but he still loved his Mac. Cook also said that Apple didn’t “invent the tablet market”, they just invented the modern tablet, which is a very elegant approach, compared to the usual bragging and boasting. The most interesting bit of the interview was when the CEO attacked hybrids saying that Microsoft’s merging of a tablet and notebook is like merging a toaster and a refrigerator… and a tablet.

And finally he said that we’ll NEVER see an Apple hybrid product, putting an end to all speculations.