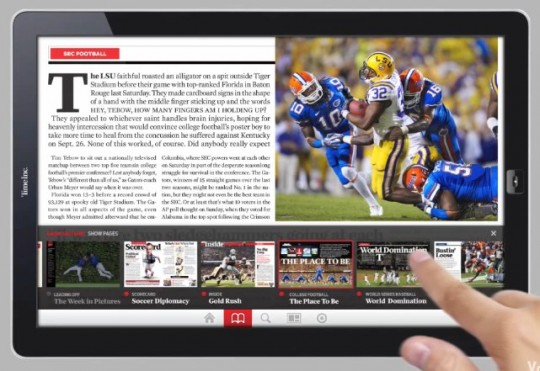 Sports Illustrated is meant to enter the digital world on the hardware side, since the company has recently demoed a future magazine concept. The new system will support text and multimedia content in an intuitive way and the device will look something like the one in the image below.

There’s also a video demo below, in case you’re wondering what the device looks like. Time Inc. also has a software demo running on a HP tablet PC, the app being the result of the cooperation between the publisher, Wonderfactoy and some Adobe AIR involvement.

Simple gestures and multitouch are used for navigation, plus there’s a control wheel in the mix, used to snip sections of text and images. Sharing via social networking services (Twitter/Facebook) is also supported, as well as page saving, bookmarking or linking into multimedia content.

It’s very possible that we’ll see an app for various touchscreen platforms, instead of a hardware reader, with a release date possibly scheduled for mid 2010.