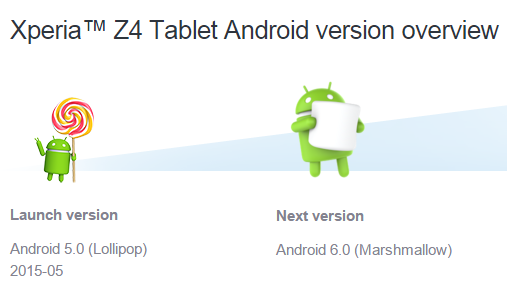 In the past couple of days we heard several announcements from hardware manufacturers that revealed which devices will be updated to the new Android variant. Among them we also have Sony, company that decided to take a different approach when it comes to its mid-range phones launched in 2015.

More precisely, several mid-range device will be updated straight to Android 6.0 Marshmallow, and not to 5.1.1 Lollipop as initially expected. These phones are the following ones: Xperia C4, Xperia C5 Ultra, M4 Aqua and Xperia M5.

Beside these devices, Sony will update the Xperia Z4 Tablet too sometime in December this year. As you might know, this tablet arrives with some great hardware specs, like the 10.1 inch IPS LCD display (2560 x 1600 pixels), the octa-core Qualcomm Snapdragon 810 processor clocked at 1.5 GHz, and to the 3 GB of RAM memory coupled with 32 GB space of internal storage.