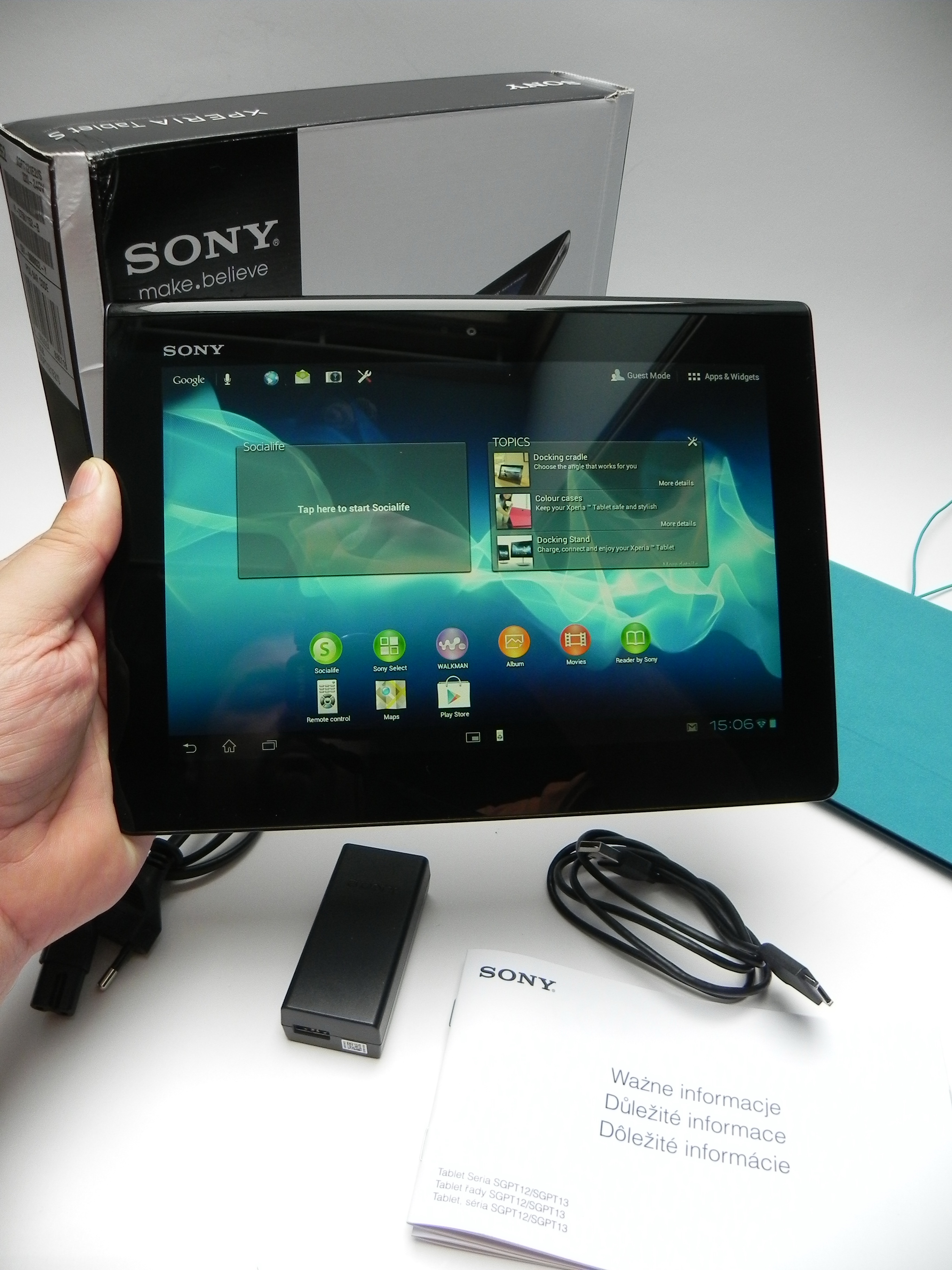 I’ll tell you from the start: Sony Xperia Tablet S is a letdown. We were expecting a huge jump from last year’s disappointing Sony Tablet S and they actually went ahead and upgraded that machine… slightly. The result is the Sony Xperia Tablet, that was shown at IFA 2012 at the end of august and launched in September. We’re dealing with a product that costs $399 for the 16 GB WiFi version and frankly speaking, you’re better off buying the ASUS Transformer Pad 300, for a similar price. 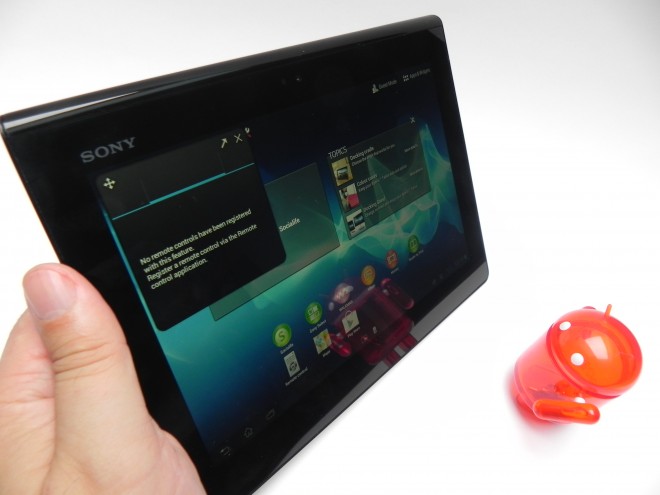 This 9.4 inch tablet looks pretty much the same as the model from last year, with the “folded magazine” form factor and all. At least this time the case is aluminum at the back, which gives a solid iPad-ish feeling. The tablet measures 8.8 mm in thickness and weighs 570 grams. It’s got a splash proof screen, but apparently production problems have caused gaps between the screen and case and the display is actually not splash proof. Sony even had to stop production at some point.

You get a proprietary port at the lower part, with a little detachable lid on it and on the side we’ve got a SD card slot, with a lid that’s very hard to remove. On the other side we’ve got the volume buttons and on/OFF buttons, that are pretty hard to press, since you have to guess where they are. The aluminum back feels nice and has good grip. The hardware of the device includes a LED backlit LCD with a 9.4 inch diagonal and a resolution of 1280 x 800 pixels. The screen uses Sony Mobile Bravia Engine technology and moving on with the hardware, we also get stereo speakers here and a storage capacity of 16, 32 or 64 GB. 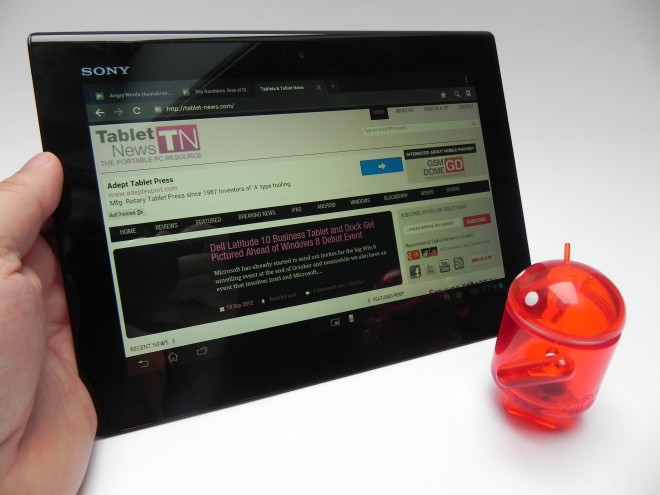 There’s also 1 GB of RAM on board, WiFi, Bluetooth 3.0 and infrared connectivity. At the back we’ve got an 8 megapixel camera without flash, but with autofocus, geotagging, 1080p capture at 30 fps, while upfront there’s the secondary 1 megapixel camera with 720p videochat. The brain of the slate is a quad core Nvidia Tegra 3 processor at 1.3 GHz, with a ULP GeForce GPU. Other specs include an accelerometer, gyroscope, compass and a Li-Ion 6000 mAh battery. The latter provides about 8 hours of functioning time.

As far as video playback goes, our tests have shown that the screen has some glare problems, although on paper it promises anti glare technology called Opti Contrast. It also behaves poorly in direct sunlight, but it does have good contrast and decent viewing angles. On the audio side, we’ve got fantastic speakers, lots of equalizer options, a great visualiser and a nice bass. The camera is a huge letdown, with a poor UI that reminds me of the PS Vita and huge lag when trying to view the pics you’ve taken. 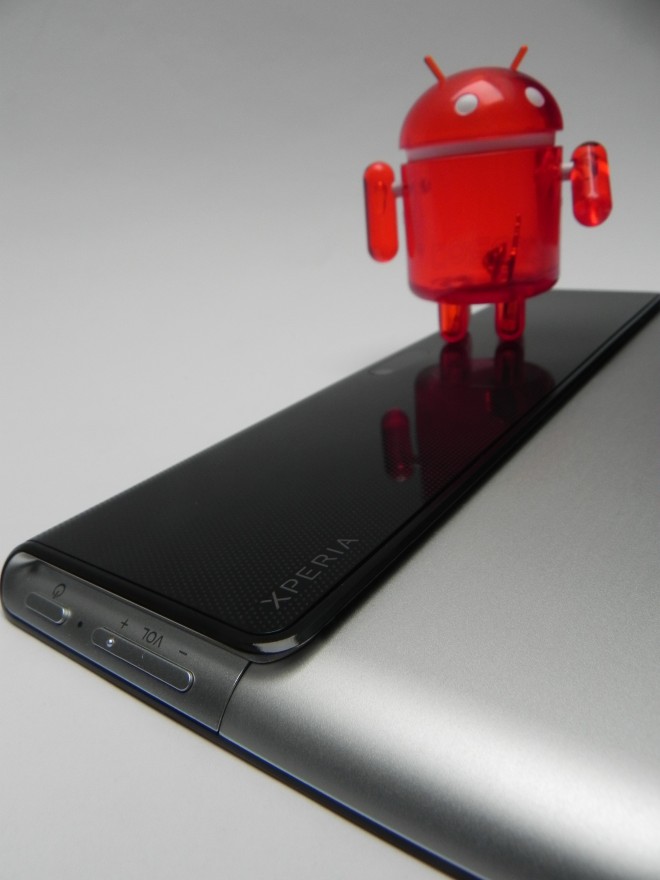 The video capture is also disappointing and forget about zooming and low light pictures. Speaking of lag, when you press the On/Off button while in standby mode, one time out of three the tablet will stall 4-5 seconds till lighting up the screen, which is a huge bummer. Moving on to the software side, we’ve got here Android 4.0.3 running on the tablet, with a nifty Guest Mode, that you can customize and it can come in handy if you have kids or kids are visiting you. The Guest mode allows you to customize the experience, the apps you can open and the features you can access.

There are shortcuts in the upper left side of the screen and in the middle lower side. The shorcuts include a web browser, settings and a collection of tools, including a remote control, that’s actually kind of cool. The cool thing about the remote is that you can program some macros, so your devices (Blu ray player, HDTV etc) execute a bunch of commands with a single press of a macro button. Sony customized the experience with unique apps, widgets and icons, including the Walkman widget, Social Life widget and Topics for example. 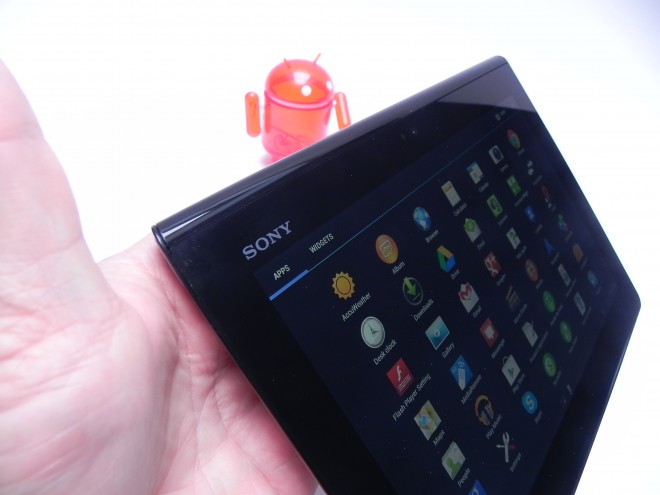 In Vellamo we scored 1266 points, while the TF300 scores 1300 and the Note 10.1 2356, so it’s not exactly top notch. In Browsermark we scored 130.000 points, surpassing the 120k points of the TF300, but scoring under the 150k points of the Note 10.1. The device also had some WiFi problems, but those were fixed by the first OTA update it got. On the apps side, we get a ton of interesting applications to play with, from the photo album, to the Scrapbook, Social Life that looks like Flipboard a bit, the Walkman player that’s fantastic and the Xperia Link that connects you to Xperia phones. 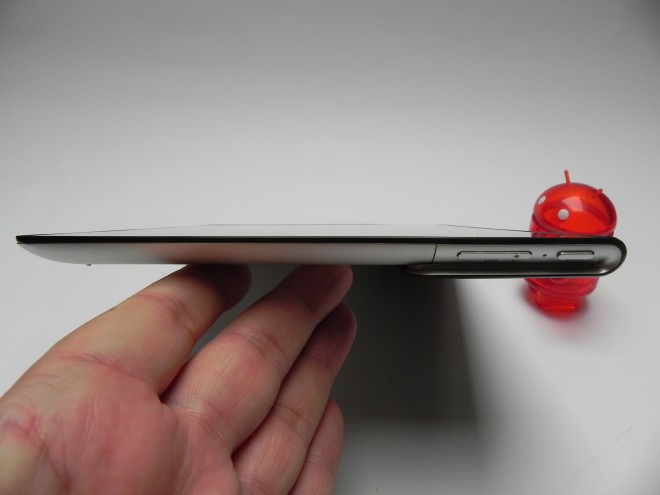 We’ve also got bundled apps like Zinio, Evernote, Office Suite, plus the usual Sony Reader, Music and Video Unlimited, that in some regions of the world won’t work. We’ve also shown you a carrying cover, an accessory for the tablet that can prove to be quite useful. You can even prop up the device using it. And now we’re ready to give you a verdict concerning this model. The Sony Xperia Tablet S pros and cons are as follows:

For the design we give it a 7.5 out of 10, for the hardware an 8 out of 10 and for the OS and UI an 8 as well. Sony Xperia Tablet S gets a total grade of 7.83 out of 10 and it’s a bit of a disappointment for us, since we were expecting a bit more, to be honest. I’m not sure we’ll see a future Android tablet from Sony, after this model’s problems… 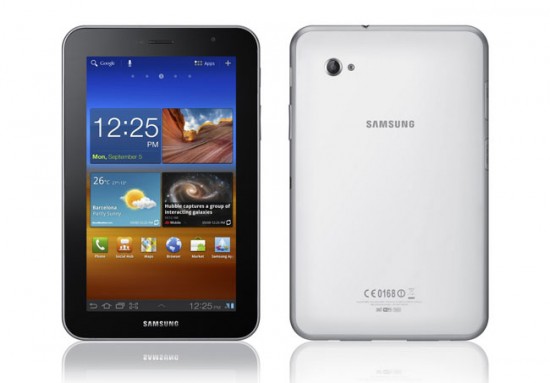