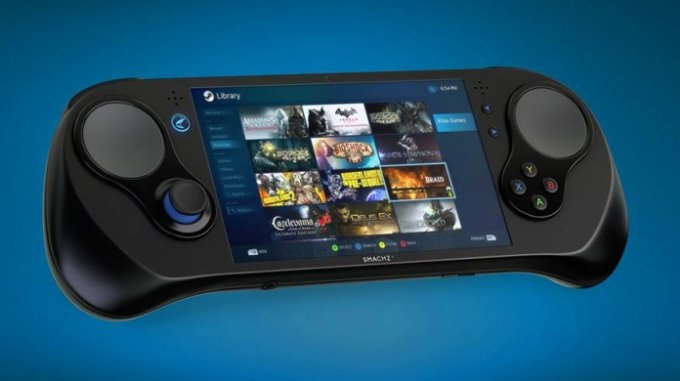 We’ve seen our share of handheld gaming PCs, but the Smach Z is certainly a different beast, since it relies on the AMD Ryzen V1605B processor. The device is shown above and also below, even in a dissected version.

The idea of a handheld PC for gaming sounds a lot like the Nintendo Switch or a Razer machine, but the format is unusual. The product has been in development for years, apparently and it’s finally expected to ship this year. Smach and AMD have announced officially that the system will be powered by the Ryzen V1605B CPU. Smach’s product appeared in renders even back in 2014, under the nickname “SteamBoy”.

Smach CEO Daniel Fernandez claimed recently that he wants to bring the device to the market as soon as 2018. This week the CPU was said to be the AMD Ryzen Embedded V1000 one, but the CEO has shared new intel, that includes 8 GB of RAM and the new V1605B chip. It was originally meant to run Valve’s Linux-based SteamOS and it comes with a 6 inch Full HD display, physical gaming buttons and dual touchpads, on the left and right sides.

We’ve got no physical keyboard here and the touchpads are similar to those on the Steam Controller. Graphics performance are promised to be on par with the AMD Ryzen 5 2500U laptop class CPU. 12W – 25W TDP is promised here. Smach Z went up on preorder via a Kickstarter campaign in 2016 and it’s supposed to come in two configs. The basic one has 4 GB of RAM and 64 GB of storage, while the higher end unit has 8 GB of RAM and 128 GB of SSD.

Specs include a 6 inch Full HD screen, WiFi, USB ports, DisplayPort, SD card slot and the OS is listed as Windows 10 or Linux. Up to 5 hours of battery life are also promised.

Smach Z is a Handheld Gaming PC, That Relies on an...