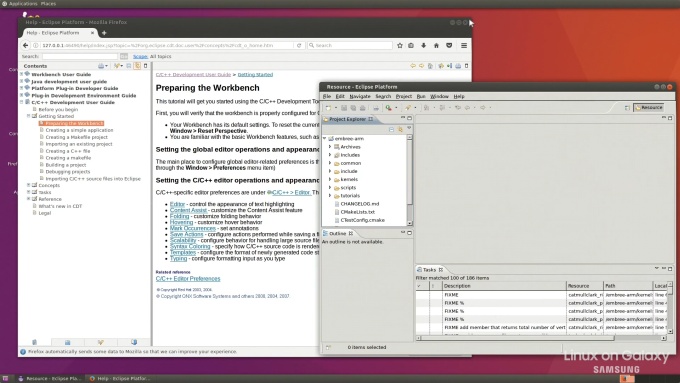 You’ve probably all heard about the Samsung DeX Dock which lets you hook up your phone to it in tandem with a monitor and simulate a PC experience. Well, now Linux has been added in the mix, courtesy of the “Linux on Galaxy” plans announced by Samsung itself.

The aim is to run full fledged Linux on a phone that hooks up to a DeX dock. There’s a video that details the process and things feel very familiar, because they work just like they did before, only instead of a tweaked Android, we get full Ubuntu this time. It’s actually Ubuntu 16.04 and from what we’ve heard users will be able to run different Linux environments, too.

Once Ubuntu loads up, the users opens up Eclipse, which is an integrated development environment, used to create Java and Android apps. Basically, what this does is it lets you create Android apps on an ARM machine.

Aside from the dev stuff, regular users will run desktop apps and not just Android apps on their paired up devices. One would access desktop Chrome, Firefox, LibreOffice or GIMP let’s say. This guide on  Linode will show you how to install the Open Java Development Kit (OpenJDK) 11 on Ubuntu.

I’m guessing they’ll push this with the Galaxy S9 and Note 9 next year.