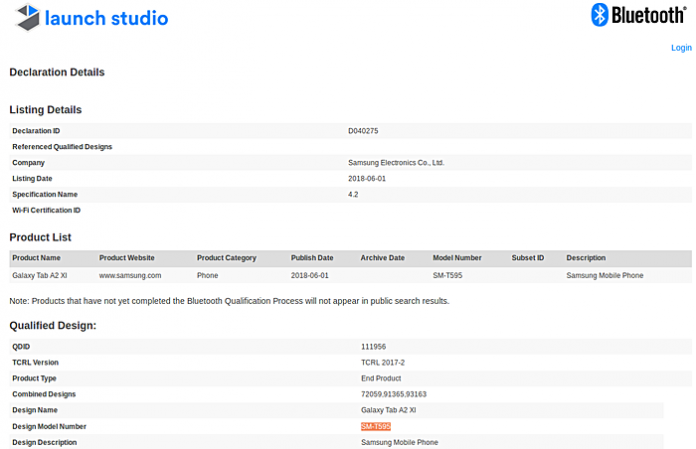 There’s a fresh Samsung tablet in town, a device that has just been certified by the Bluetooth authorities and it’s listed as the Galaxy Tab A2 XI, aka the SM-T595. This model is very likely the successor to the Samsung Galaxy Tab A 10.1 (2016), a LTE model that had the codename SM-T585.

The SM-T590 should be a WiFi only version of the new device, which was spotted last month on the Eurasian Economic Commission website. We don’t know much else about the slate, which could end up as the Samsung Galaxy Tab A 10.1 (2018). Seeing how it started receiving certifications, it’s probably just a matter of time till it launches. We don’t have specs, sketches, or anything else, so we can only speculate regarding the product.

I expect it’ll have a 10.1 inch screen again, with a Full HD resolution and the 8 MP camera may stay unchanged, or be bumped to a 13 MP shooter. The Exynos CPU is also due an upgrade, while the 7300 mAh battery sounds OK to me. All of these specs I’m mentioning are associated to the Samsung Galaxy Tab A 10.1 (2016). That one came with Android 6.0 Marshmallow and was upgraded to Android 7.0 Nougat.

Obviously, the newcomer will get Oreo. The reputation of the Tab A models has been the following: good batteries and nice Microsoft Office integration. I expect similar feats from the newcomer.

Teclast P89 Mini is an iPad Mini Clone With Intel Inside